Last month the most direct route from our house in Phnom Penh to my parents’ doorstep in NYC took 29 hours. We took two flights: Phnom Penh – Hong Kong for three hours, then Hong Kong – JFK for around 16 hours. It’s a long time on the road with an infant. Our baby practically lives in a suitcase, and has been on numerous flights since he was born – always as a lap child (at $1520 a seat on this flight, I think we’re going to take him as a lap child as long as we can!), so he’s used to flying and is generally manageable on flights. Nevertheless, I’m always anxious before the trip and packing “his” carry-on is de-stressing me. 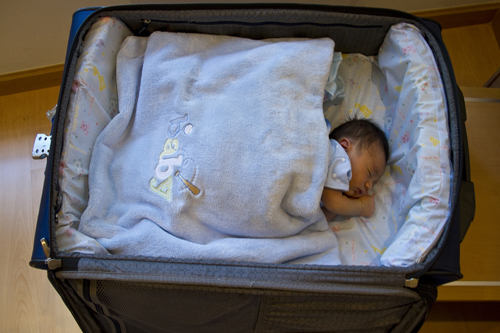 We’re preparing for our trip back this weekend — yes, after I’d finally adjusted to the time zone and the cold weather. And grr we lose a day going back to Asia. But after several weeks of on-and-off colds and coughs, we’re ready for some tropical weather! With the rainy season over (though the floods in SE Asia sadly are not..), it’s the start of the cool season there.

So for keeping the baby constantly entertained on the plane? We’d irritate fellow passengers after Old McDonald belts out his farm song for the 20th time so no loud toys. Nor bright blinking toys, since they dim the cabin and passengers sleep to adjust to the time change. We’re packing a couple of his favorite snacks and activities. Here are a few ideas, but these are too things many to lug around. It’ll be just as chaotic keeping track of them as it is to keep the baby entertained or asleep.

Not to mention other necessities like an extra change of clothes (for both of us and the baby), enough diapers and wipes, and low expectations: Six months ago as a four month old, he did well on the same cross-Pacific trips because he nursed and slept a lot back then. But on this trip here he’s a mobile and easily engaged tot with an intense curiosity. I went into the Phnom Penh – NYC trip with some trepidation, and I found I had a significantly more difficult time than when I’d previously embarked on flights with an open mind and low expectations. Good thing hubby has a more laid-back and calm personality so the baby didn’t have just my frazzled self to soothe him.

Here’s hoping for smooth flights and a soundly asleep baby for most of the trip..