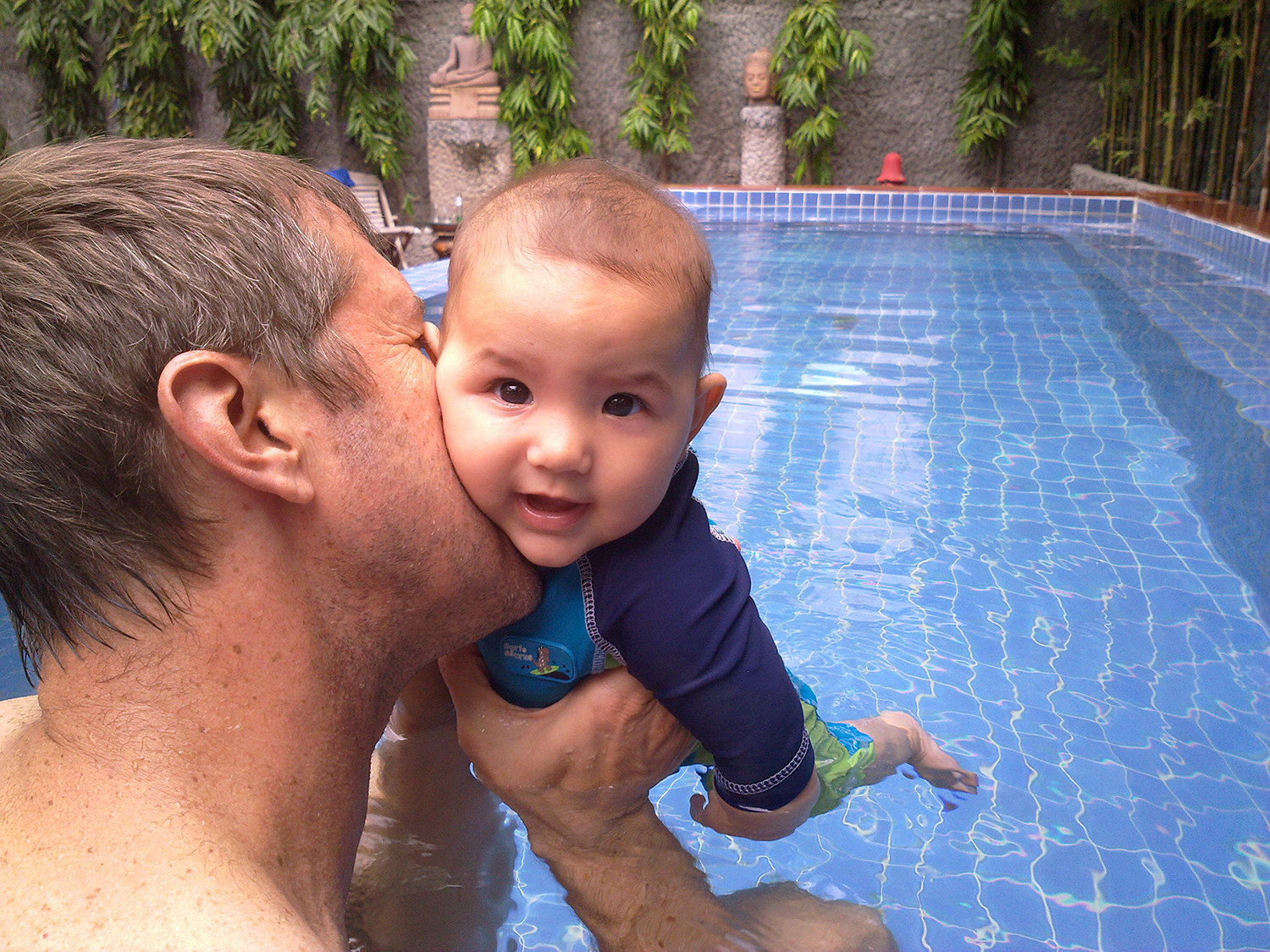 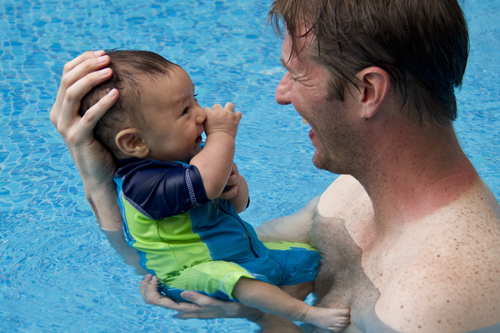 Just a few dunks and babies’ water instincts take over. It was the same with our first when he was a baby. Teaching an infant to swim is fun cuz you see results so quickly. Too bad our older child had many months’ break from the water and developed a fear of it. At this point (he’s 2 1/2) I guess the best way to teach him is to toss him right in..?!

Mum and Papa are in love. Her Kuya is not. He’s less than thrilled with the little bundle, but he’s resigned himself to the fact that she’s sticking around so he finds ways to bond with her… :-) 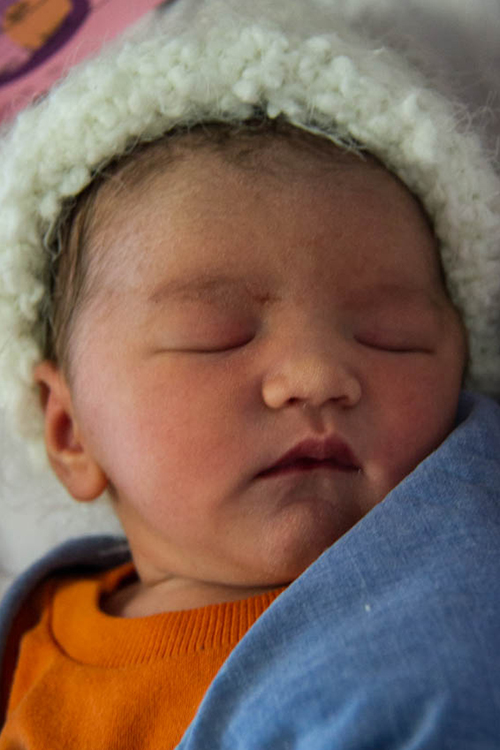 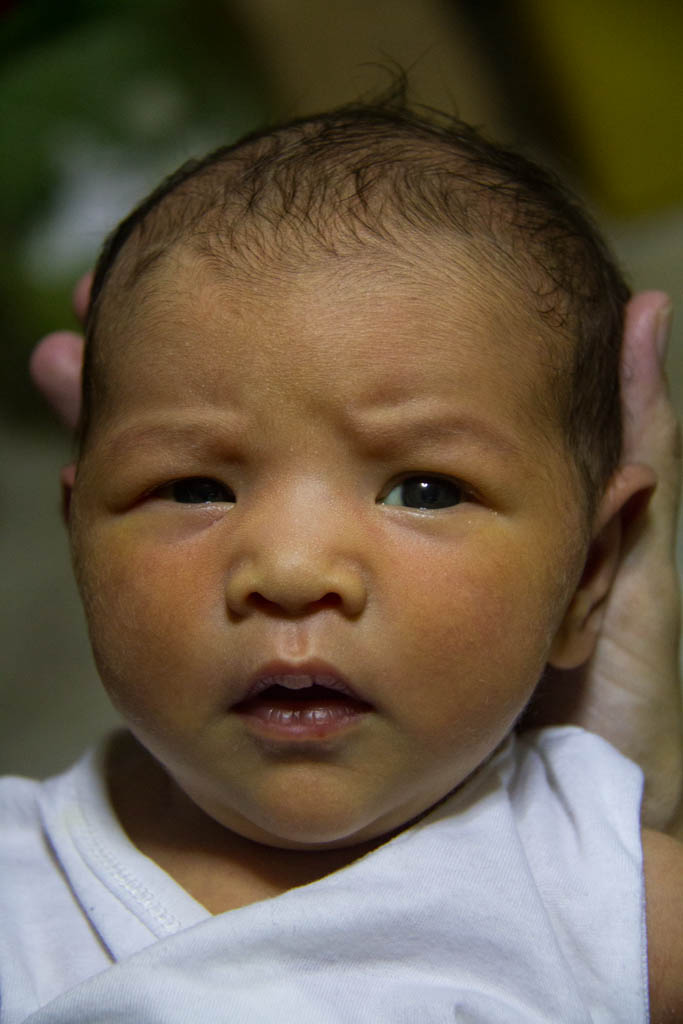 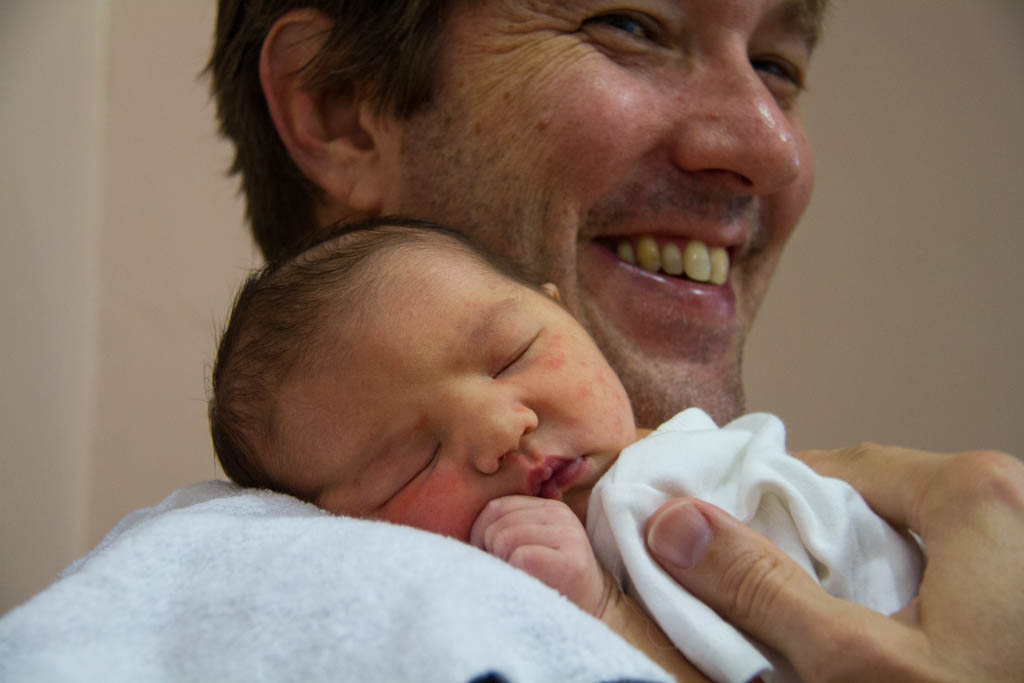 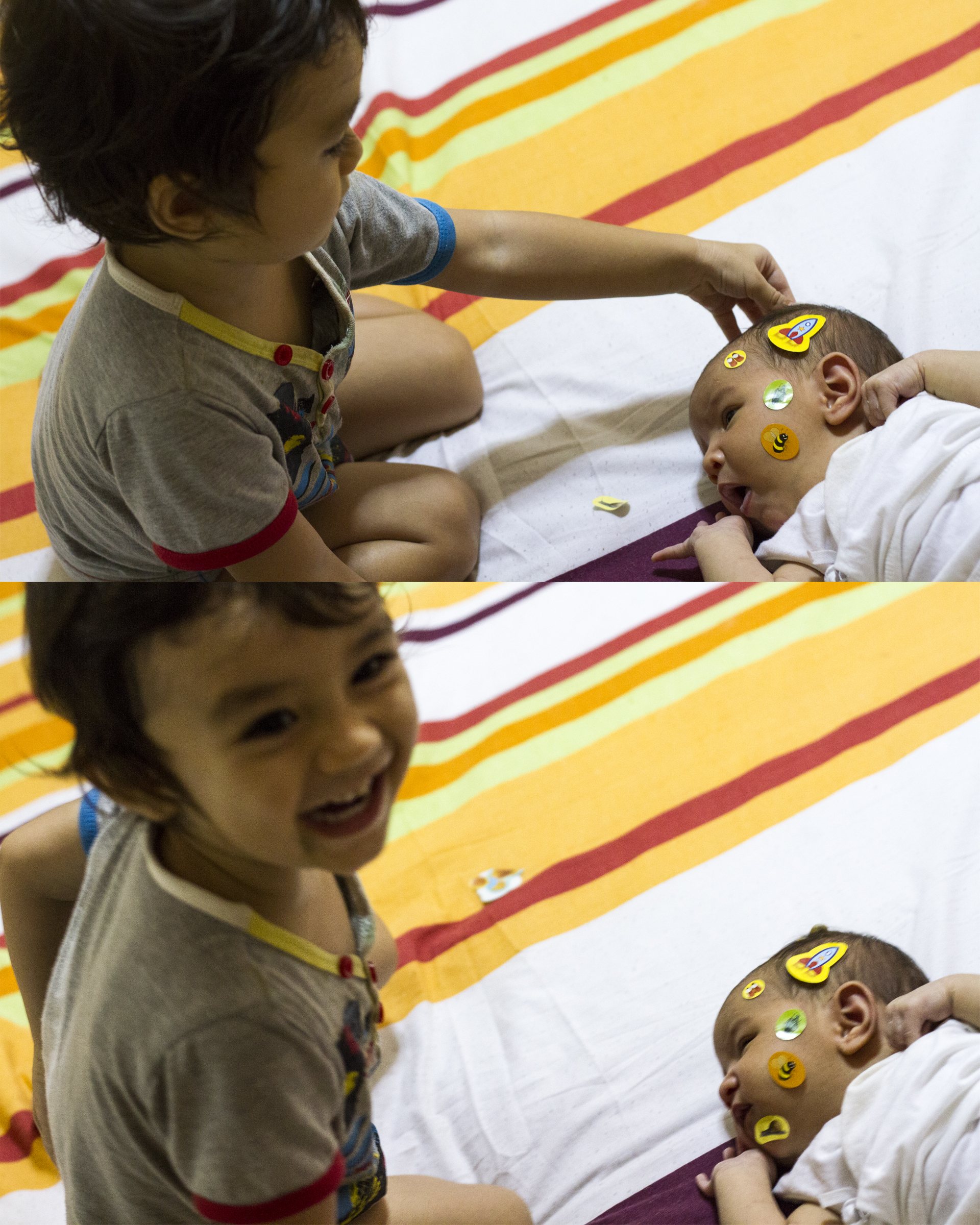 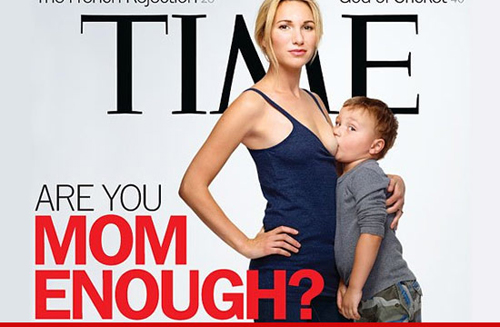 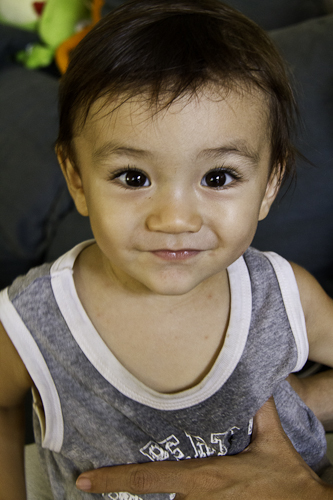 As a mom, it tears at my heart. It was shocking at the same time that I know it meant a better life for the baby.

It’s commonplace, but I don’t often personally see or hear of it. A woman gave birth to a healthy baby girl around 7am, at a health center where we were field-testing some questionnaires. Usually anyone admitted to a facility is accompanied by throngs of family members, who provide the care to the patient that back home would be done by health staff (eg providing meals, making sure medicines are taken, changing the dressings etc). But there was no one with this very young mother. She was thin, ragged, and very weak. She breastfed the baby a bit, on prompting by the staff, but by evening someone noticed that she hadn’t eaten all day. She couldn’t afford it – not even a bowl of porridge (around 2000 Riel or US$0.50) from the lady carrying pots and bowls in baskets balanced on a bamboo pole.

The new mother asked the staff to look for someone to take the baby because she couldn’t afford to feed her. As it turns out, my colleague has an older sister who is unable to bear children, so she agreed to take the baby for her sister. She offered some money to the staff and the staff gave a portion of it to the mother.

My colleague’s sister has had the baby now for a week. She loves the baby like her own, and she registered the birth so according to official records she is the biological mother. I wondered about the poor woman, but my colleague has no plans to find her or keep in touch. I suppose that’s only natural.

As a side note, civil registration was introduced in Cambodia only as recently as 2002, and by 2005 only 5% of the population was registered. There’s no requirement on health facilities to do more than report the number of births (to the Ministry of Health). The family takes responsibility for registering the birth (to the Sangkat or Commune, who facilitates the registration with the Ministry of Interior and birth certificate to the baby). This proof of existence is a person’s ticket to citizenship and provides the evidence needed for claims to social services and benefits. A country’s database of vital events like births, deaths, marriages helps the government determine the best use of resources eg public health programming. 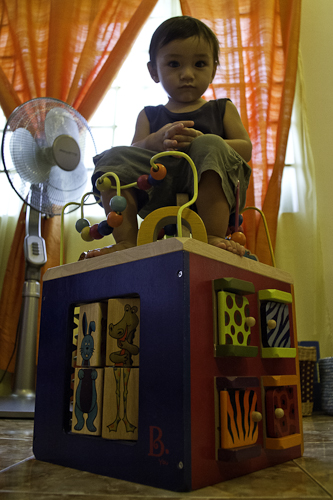 At 15 months, we’re getting a premature taste of the infamous Terrible Two stage. Our little boy’s personality seems to be developing along what the books call “spirited” or “strong-willed”, even “high-need” (although this last term is politically incorrect anymore). His Khmer nanny is bewildered and amused at the range, intensity and volatility of emotion he exhibits. He can be blissfully happy one second and thrashing about in a full rage for the next two hours. It sets him off when we don’t understand what he wants. With redirecting a bit more difficult now we’ve had to be creative.

Thankfully he’s developed some decent communication skills early on. The fact that signing and verbalizing are still novel to him at this stage, and that it gets a lot of positive attention, means we can exploit this! So we’re trying to help him realize that there are better ways to get his point across than through a tantrum.

He can sign. We signed to him since he was just a few weeks old, so he knows the basic ones like mum-mum (mom’s milk), finished, change the diaper, hurt and sleep. He demonstrates that he understands the signs but he doesn’t use all of them.

His verbal skills are excellent. His first words at just a little over a year old were mum-mum, chkai (dog), fish and turtle. Today his ramblings are sprinkled with big words or phrases like elephant (“puh-pet”), octopus (“AHH-puhpuh”), chipmunk (“muh-munk”), kangaroo (“rah-rah-rooo”), other side (“uhh-thuh-thai”).

And as with any multilingual and/or expatriate families, he’s is exposed to several languages. His nanny doesn’t speak English and most people he meets prattle at him in Khmer. I try to talk to him in Tagalog and one of our neighbors who he frequently interacts with speaks to him in Bengali.

Interestingly, he uses whichever language is easier for the word he wants to use. For example, he’ll say svai rather than mango, awluk rather than watermelon. We aren’t necessarily teaching him all four languages – but we want to give him that kind of exposure. I and most of my friends grew up in a 3+ language family and there’s increasing evidence it augments cognitive development. That he can choose between them to find the easiest way to say what he wants to say is a bonus!

And at this stage he gestures a lot. He asks to be picked up and we just follow his pointing signals.

The main point is that communication has been a huge tool in helping us deal with the Terrible Twos. It’s fascinating to watch this little boy communicating his wishes (what goes on in their little heads?!). He can now usually get his point across early so we can either accommodate him or anticipate and redirect temper flares. It’s a tiring and frustrating but very rewarding phase, “growing” this littler person! 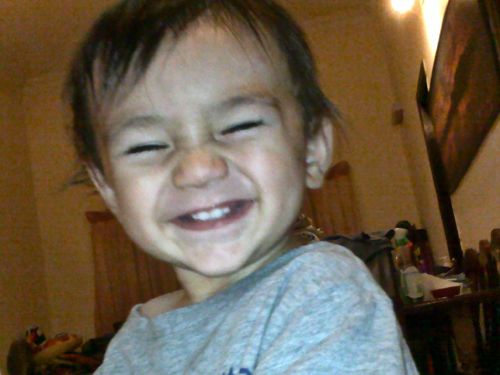 Lack of sleep – yes, it comes with the territory. (Don’t you love how every Jane Dick and Joe peddles this brilliant insight gleefully to new parents, regardless s/he’s a parent herself? Like the idea won’t logically pop into your head?) As a working mom who luckily likes her job, I’m amazed with how mind and body can actually still function – well, maybe not optimally – on the piddly rest I’m sometimes able to scrape out of my nights. (Sleep-training our little boy? I think he’s got me the other way around.)

When baby wakes me up to help him go back to sleep – and then I can’t get myself back to sleep, it’s the one opportunity I have to catch up on my rss feeds, in bed in the dark. (Thank god for tablets!)

So during these sleepless moments I sometimes happen across random great blogs, although I sadly manage to lose most of them once that elusive sleep beckons. But check this blog out: How to be a Dad. The cartoon above (a position Tristan sometimes likes to wiggle himself into) is from their sleep positions series, and here’s a witty read on Potty FAILing :-)