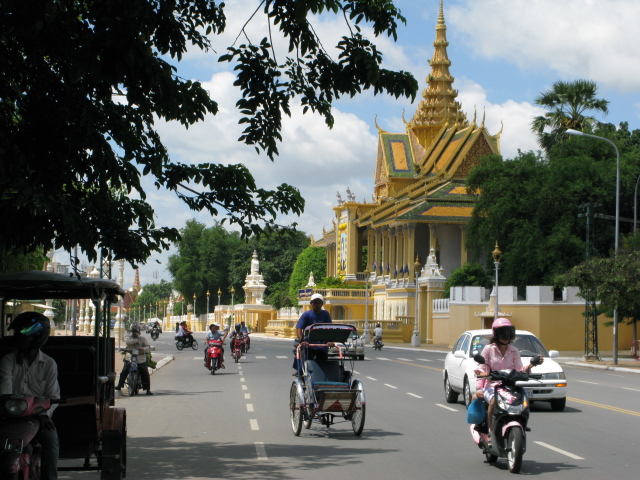 It’s that time of year again… all productivity is grounding to a lazy halt across the Kingdom. The Mekong is reversing current, the air is scalding, the rainstorms are waiting on the periphery, and we’re celebrating the third New Year of the Gregorian calendar … 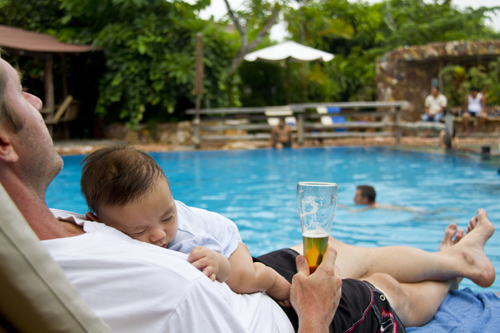 It’s a week before the biggest annual event of the Khmer New Year. Every single baraing (foreigner) I knew already left the country and there are few people at the popular expat bars. My street is lined with huge speakers, stacked one on top of the other, and every night traditional Khmer shrieking pierces the air at full blast. Female vocals have a high nasally pitch to them so thanks to the concrete makeup of structures, the screeching amplifies and reverberates superbly, while the accompanying bass pounds to the core beyond salvation of earplugs. People are on the streets boppin’ to the racket.

OK so it’s one thing to have disagreeable tunes steadily assailing your nerves. Your frazzled system adjusts and the assault can mitigate to white noise. But local deejays have perfected a Chinese water drop torture, Khmer-style. No song plays in entirety. The music starts in the middle of a screeching trill, and halfway into the track it stops. Complete silence for two seconds or two minutes–no one knows— then the shrieking explodes again without warning. Your entire being convulses into shock each time. This continues all night— And people dance straight through these intermittent gaps in the music like it is totally normal.

At midnight amateur screaming blows through the neighborhood as the karaoke begins. And every morning they wake up before sunrise to play games. Of course these would involve a lot of hollering and clanging of objects designed to transmit the unfriendliest possible noise to wake up to.

Oh, and then there’s the water and talcum powder. I wondered why there were so few people outside in the daytime. Then I saw a pickup coming down the road on the other side of the street with large drums, hoses, and riders in the back. I paid the vehicle no mind. But when it bore down on a hapless cyclist and blasted him with a high-powered spray of water so that he fell to the ground, I made for a frightened dash out of sight. People– strangers— then descend upon you when you’re down to rub talcum powder into your face. This is all in good fun I think. I might join had I not had to work throughout all of this. Sigh. I have a few days’ vacation now, so perhaps I’ll get out there and pelt my neighbors with water balloons from my balcony. Perhaps I’ll dig out an Eminem cd while I’m at it hee hee, though with my luck they’d probably like it and I’ll be responsible for introducing a suboptimal piece of Americana culture. I am hoping for escape in Ho Chi Minh City. I hope Vietnam has a sleep-friendly version of these festivities– five hours a night isn’t too much to ask is it…?