Well, Keith already has a good list of names picked out, for a boy naturally. But for me the pregnancy has so far been very draining. I just want to curl up and be unconscious until after the delivery, but I can’t so instead I whine at Keith. One of the public health dilemmas here involve getting antenatal services to rural women who are hard at work planting and harvesting their crops right to the day they deliver. Not that it’s their choice to continue hard field duties under the harsh sun and intense heat – but it just makes me feel like such an unfit woman crying about 24/7 achiness.

At least I quit full time work, and the consultancy with WHO keeps me in the air-conditioned central offices and not traipsing about the boonies looking for latrines every five minutes cuz there’s less room for the bladder. Unfortunately that superpower pregnant women get – sense of smell on steroids – is not an asset in Phnom Penh. I don’t know if this happens to other women, but sneezes have become really violent – I still forget that I have to double over and hold my stomach or I’m on the floor afterward with intense cramps, bug-eyed that I’d just ripped out the tendons holding the uterus in place. Foods I once loved are now really disgusting – garlic and ginger make me gag. Since nothing tastes good the solution is to just keep eating. And staying fit is such easy advice.. for such a lean mean cardiovascular machine women become when we get pregnant, my energy level has sunk to limiting my movements to a 3block radius of my flat or hotel room. Less if I can get Keith to run errands for me. Hehehe.

Really, I have no idea why anyone would go through this more than once or twice.

So it’s quite fun to do the scan – it makes the baby very real and the aches and pains more tolerable. Somewhat. We had to fly to Bangkok last week to get some diagnostics done cuz they can’t do it in Phnom Penh. Here are some pics, which the doc had us watch on a large screen TV. 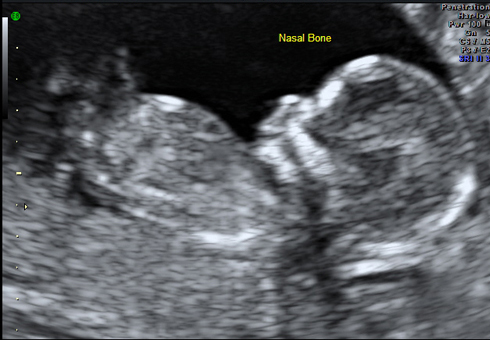 One of the markers of chromosomal abnormalities is the absence of cartilage on the nose (nasal bone). So luckily it looks like the nose takes after Keith’s cuz if s/he took after mine that cartilage probably wouldn’t be there yet. S/he looks like s/he’s smiling huh :-) 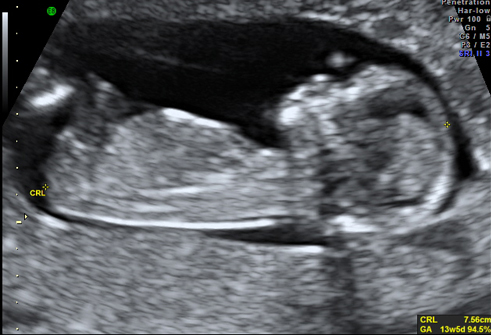 The nuchal translucency (NT) they measure is that white line along the vertebrae, present only from 10-13weeks. The thicker it is the more likely to have some disorder. The doc took several measurements, with the average about 1mm thick (it’s a bad sign if 3mm+).

The baby was about 2.7inches crown-to-rump :-) And s/he was really active! S/he was flexing arms and kicking legs, stretching neck, twisting around – like s/he just had a caffeine kick or something! The Thai ob/gyn was also really tickled, even though it took him longer to get some good measurements cuz the baby won’t sit still. 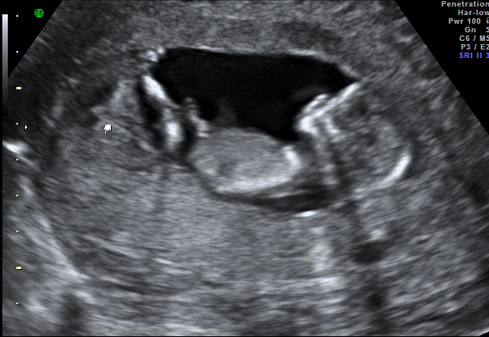 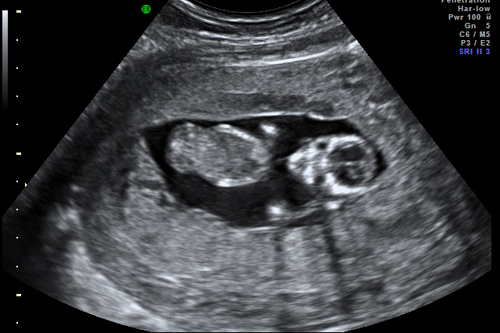 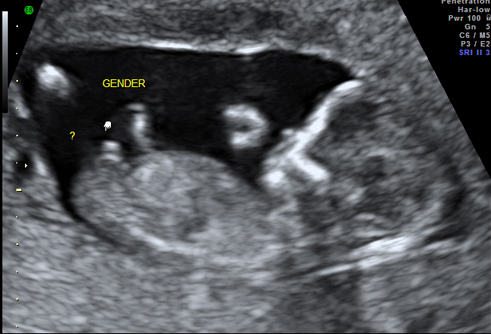 We asked the doc what the gender was and he made a wild stab. So anyway, here’s the little guy. Thought we’d share.. :-)