Cheers from this side of this rock’s molten core! I was decidedly NOT too enthused about joining an event where Americans by the thousands gather at the American Embassy to celebrate this American holiday. (Seems like putting a bull’s eye on ya, eh?)

But it was ok! We were safe! North Korea even kicked the celebrations off with dud scuds all throughout the morning (A for Effort!). And sheesh the number of Americans in Phnom Penh always astounds me :-)

Naturally I was there on task for the Democrats Abroad Cambodia. I was politically unaffected throughout the election season of two years until Sarah Palin grabbed the VP nomination and ended John McCain. Our little Cambodia team kicked butt of all DA groups all over the world with 100x our budget and number of expatriates. We rock, dude! And Americans abroad? You rock, cuz your votes gave the Dems six seats, plus handed the presidency to Obama!
Actually, more accurately: the vote-from-abroad reforms that were put into place in time for POTUS elections 2008 allowed overseas ballots to be counted from the get-go instead of placing them in a pile to be opened ONLY if a tie needed to be broken! We have a great team, and even though I’m not a Democrat I’m happy to work with them to change some things that adversely affect American expatriates.

This is the first time I’ve ever had a corndog can you believe it? The Embassy special-imported these from the US. I now know why I never bothered to try them in the first place :-) 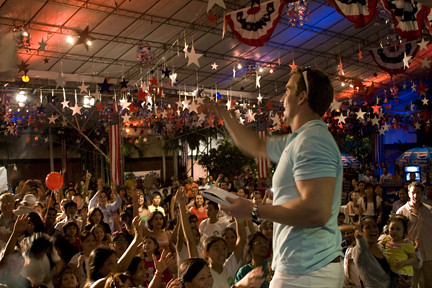 Keith’s basketball buddy here onstage rallying the crowd. That was an awesome crowd (over 1500!). Great event, good to get in touch with Americana. Got my homesickness over with for a little while :-)