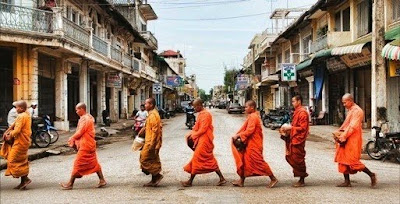 This is such a great photo, shared by Metro Cafe.
It is Pchum Ben in Cambodia, one of the biggest Buddhist holidays in which people visit the pagodas and bring offerings in remembrance of their ancestors. Once again there is a mass exodus from the city as the Khmer go to their provinces to visit their families, and foreigners take advantage of the many days off to flee the country.

Pchum Ben is similar to the Christians’ All Saints’ Day. This ritual used to be an ancient Celtic celebration called Samhain. Attempting to suppress these pagan traditions the Catholic Church created All Saints’ Day (All Hallows Day) in the 7th century to christianise the event.

Other cultures have rituals for remembering their dead around this same time of year too:

Safe travels on this holiday everyone!