I’ve just had a chance to flip through this book. It’s a photo essay on the Khmer tradition of providing a home to beings (elves) believed to provide them protection, guidance and advice. Look around Phnom Penh and it is such a common sight on the streets outside of residences, that it barely registers in your peripheral vision.

Some people paint the houses, hang clothes outside it, add toy vehicles and phones and other things that represent everyday items, to keep the Mrenh Gongveal (ម្រេញគង្វាល) happy and entertained (otherwise a bored Mrenh Gongveal apparently wreaks havoc on nearby humans). As the author noted, this is a story that’s increasingly lost in rapidly modernizing Cambodia. Fewer and fewer Khmers know of the origins of this practice, instead offering up the simplistic rationale that it brings luck, without being able to explain further.

Cambodia has such a rich history, with traditions unique to it. For example, nowhere else in Southeast Asia is this practice seen. I hope more people document this and other traditions from different perspectives so they aren’t lost to history. So much knowledge has already been lost.. 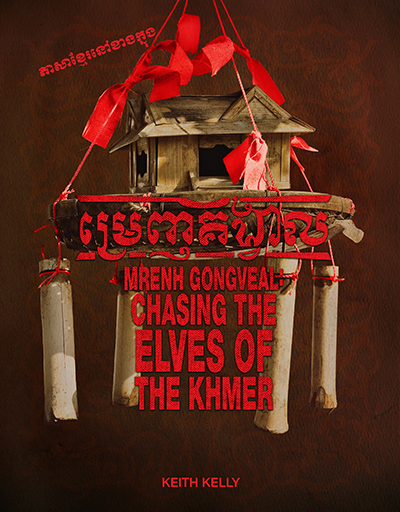 Mrenh Gongveal [Khmer: ម្រេញគង្វាល] are mythical beings resembling elves of western folklore. By anecdotal accounts the roots of Mrenh Gongveal appear to be uniquely Khmer. They have a small stature; as short as half a meter (1.64 feet) tall up to around one meter (3.28 feet) tall. Mrenh Gongveal are believed to possess great benevolence, though a fondness for mischief. Mrenh means “tiny” (the equivalent of dwarf). Gongveal means protector (an antiquated word not commonly used in modern Khmer language).

Originally they were perceived to be nomadic beings in the jungle, where they were the guardian herdsmen of wild animals, especially social animals that travel in herds, such as elephants. Hunters, farmers and mahouts (elephant trappers), would make baskets to leave offerings for Mrenh Gongveal, to bring luck in the hunt, to help them capture young elephants and buffalo, or to ward wild animals away from their crops. Today Mrenh Gongveal are thought of as akin to supernatural guardians, associated with a person, place, or institution. They protect or offer guidance to their benefactors, usually through telepathy (heard as whispers) or influencing dreams.

This book is available on Amazon (click on the affiliate link on the sidebar). Keith, my husband, had an obsession with photographing the more interesting Mrenh Gongveals that he’s seen over the years, and compiled the best ones into this book. It’s our souvenir from our time in Cambodia :-) See some of the photos here.