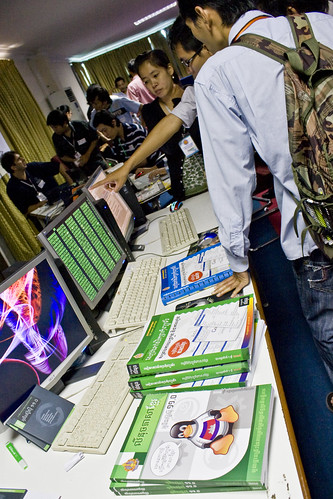 This year’s 2-day BarCamp Phnom Penh event was held at Paññāsāstra University (South Campus), Phnom Penh. Increasing interest in all things technology shows in the registration and attendance- over 1000 registered with many more walk-ins, compared to last year’s several hundred in total. In the months leading up to this conference the organising group held weekly mini-barcamps, where different ideas, tools and networks were showcased.

Tharum Bun writes in the KI Media: [it] introduces Cambodians a new way, if not a breakthrough, in which learning, collaboration, sharing and networking can take place here in Cambodia.

Such quick uptake of new technologies, as elsewhere, signals a positive development for the country for the potential means to influence direction of change. Politically, Cambodia’s descent to intolerance has invited much condemnation from the world’s leading human rights and development institutions. After several decades in office, the ruling party consolidated its power base through national elections that severely weakened opposition parties in 2008. This was followed by a worrying rash of crackdowns against detractors both inside parliament as well as in civil society. Even the state institution for Buddhism is implicated in the political squabbles, which bodes poorly for the already fragile social fabric that is recovering from the wars.

So it’s refreshing to see, given these political events, an increase in social networking (among other things tech) among the young people here. It gives critics a chance to be heard, no matter how sparse its peers and audience may be at first..

At least they have a small head start, on the heels of widening censorship of internet use across Southeast Asia. As with its neighbors, Cambodia currently lacks the technical capability to police the internet. Or perhaps that’s the strategy behind the poor communications infrastructure despite donor interest in building it up? :-\