A dismal overcast day spawns in the Kingdom. The mighty Mekong bucks and swells with all the world’s rage. Celestial beings roar.

Across the land village radios quiver with the news: the Eye of God cometh. Today a dark day falls. None shall be spared.

Humans and fortune tellers and witches scurry about their paltry rituals and offerings to stave the impending doom. But the cauldron of the heavens boils and bubbles. In just moments the essence of wrath will descend upon earth to end this corrupt age of Kali. Lesser clouds sent by a kindly small (unknown) Hindu god for Cambodia’s meager comfort cower as the lunar transit arcs straight into the solar spectrum.

[looks to see if you, reader, are still watching….]

Well. Thunderclouds rage also in my thoughts. There goes my view of the solar eclipse. Would be nice to see the arc of the cosmos hurtling us towards our destruction, at least.

[sulks. chucks a used tissue over the balcony… and the used tissue chucked over the rail blows into my downstairs neighbor’s balcony.]

[a small smile escapes.] This day may yet improve. :-)

Our six and a half minutes of solar eclipse was watched by many of my friends, thanks to my news flashes on Facebook. Here below is a picture taken by Dave Coolio, since for part of those six minutes I was called into someone’s office for a minor query. :-(

Also why Dave felt the need to point out the obvious in the photo is beyond me. 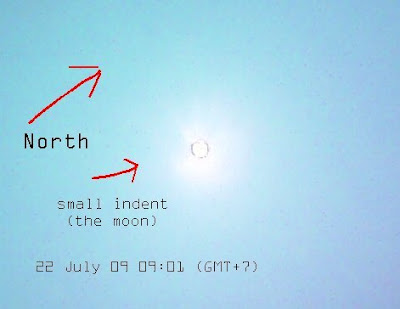