Here are scenes from a recent trip to visit a colleague in Kampong Cham, Cambodia. For more photos see Keith Kelly’s flickr. 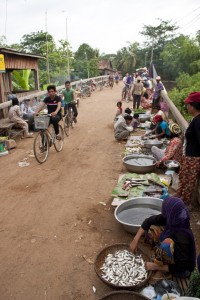 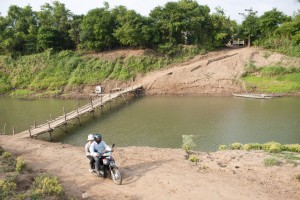 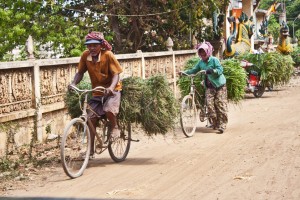 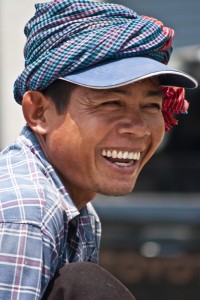 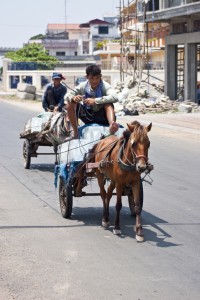 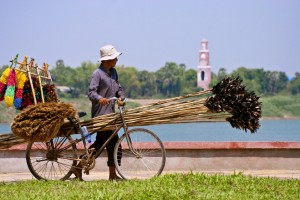 For some reason, the cloud formations around here are really cool, especially during the rainy season. They get big and puffy like the clouds you liked to think were bunnies or pandas or other cuddly creatures in the sky when you were a kid – cumulus and cumulonimbus clouds is what I think we used to call it in 2nd grade. It makes for dramatic sunsets. Except the rainy season has refused to come to SE Asia so far this year, and any gorgeous sunset is completely lost on our poor melting gray cells. 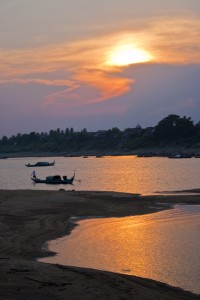 Looking for a great meal? This coconut oil fried fish from the Two Dragons Restaurant near the town center is THE BEST DISH EVER!! I tell you I think there’s crack in this dish, it’s SOOO GOOD and that is all the descriptive narrative I can sputter about this.

And you’ve already seen how people travel around here. I don’t like to sit in the middle or the back of the bus cuz I get motion sickness, but sitting in the front and watching these trucks piled high with people swerving in and out of the traffic makes me nervous. Yeyy for iPods. It’s also a good thing that all manner of pirated angry music is available in Cambodia. It’s a good soundtrack for riding the Cambodian highways, to shove aside all empathy for these poor riders in favor of aggressive mental video gaming and point systems.

Would you believe this bamboo bridge in Kampong Cham has to be reconstructed from scratch at the end of each rainy season? The land shifts with the Mekong River flows, and the bamboo washes away with its floods. The folks living on the island get separated from the mainland and use boats for transport. More photos on Keith Kelly’s flickr. 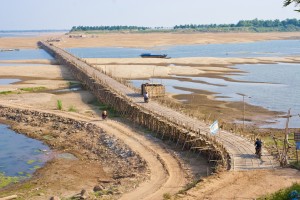 And THIS is how they’d transport SUVs and other similarly heavy equipment across the river, by tying two boats together and nailing a wooden plank on top. I used to cringe every time I traveled this way across raging rivers over a kilometer wide, but now I know these things are indestructible. You just gotta believe. 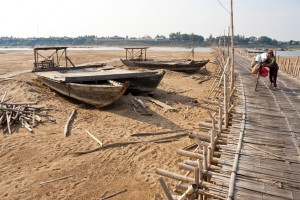 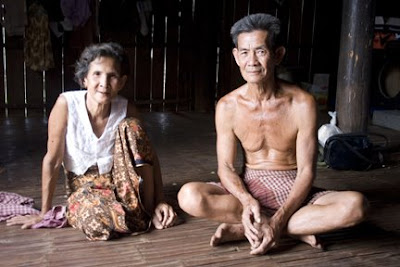 We just wanted to go for a walk to get some air, after two whole days indoors through several ceremonies. We attended a Buddhist ceremony in Kampong Cham for a friend’s grandmother who passed away 10 years ago. This is the province with the beautiful women, according to many Khmer men in Phnom Penh. It might somewhat be validated by the recent legislative crackdown on weddings to foreigners, to prevent trafficking of women. Apparently Korean men looking for a nice obedient wife tend to look for one to buy/marry in this province, until several miraculously escaped abusive relationships in S Korea and reported it upon return.

But I digress. This couple were guests at the event, and we inadvertently followed them home. When we indicated through various gesturing and mimings that we wanted to walk around the village a bit, they wouldn’t have that– “dangerous”, they said. “Come with us to our house.” 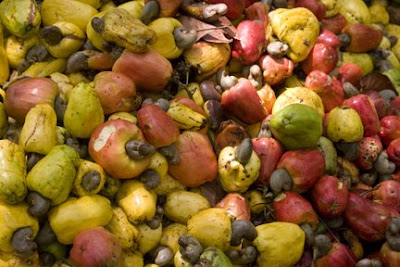 There they served us up some tea and cashew fruits. The lands to and around Kampong Cham are dedicated to farming cashews and rubber plantations. The soil is particularly good for growing very high quality cashews, but they are mostly grown for export to Vietnam and Thailand. The Khmer in turn imports Vietnam’s sub-par cashews to sell to its own people. Rubber is exported to China. It fetches high prices, but not high enough to compensate for the damage it renders the soil after a few years of high yield. The agriculture policy is still not effectively implemented, and besides, there’s very little regulatory capacity not to mention intense corruption when it comes to land and land use. Small farmers are pretty much left to their own devices and vulnerable to the demands of neighbors and subsequent market imbalances. 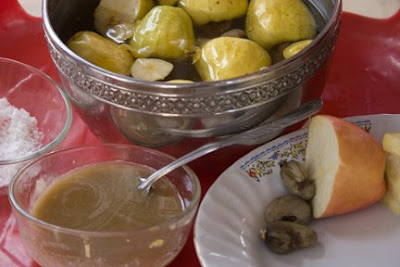 They eat the flesh of the cashew fruit here, not just the nut. The older folks especially love it (maybe cuz it’s soft?) dipped into a sauce of palm sugar and water. 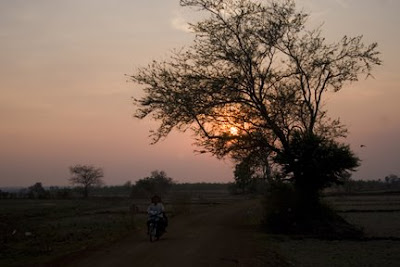 We walked back to my friend’s house in the sunset..