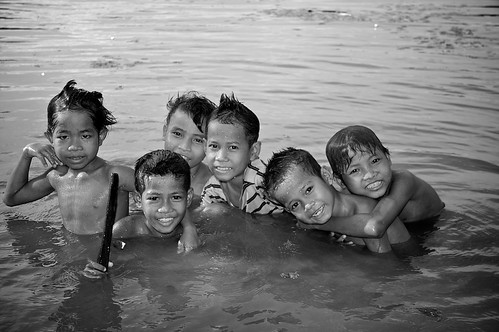 With such rapid pace of progress, Cambodia eagerly embraces a bright future. That’s the upside. What’s disheartening is that it’s a future that chases inspiration externally– specifically from the West, while rejecting its own rich legacy and heritage.

Silence about the Khmer Rouge period

With the KR trials commencing, spotlight is on the reaction of the Khmer population. But collective suppression of this period in history is the prevailing practice. Even the international community avoids the issue: aid funding for mental health has been nil, despite numerous requests and rampant indication of need. What little dialogue is had about tribunal activities is mostly aimed at foreigners and international scholars, researchers, interns.

Khmer kids have not an inkling of the import of the Khmer Rouge period. It’s not taught in school, barely mentioned in the home, and no discourse is had in the public sphere. To be ignorant of it is one thing, but I was shocked on arrival that my new friends flat-out deny these atrocities ever even occurred. They say it’s just old people talking to scare them… Here Seth Mydans reports on how Cambodia’s youth know little about the Khmer Rouge atrocities (NYT):

Some older people get so upset at their children for not believing that they say, ‘I wish the Khmer Rouge time would happen again; then you’d believe it,’ Mr. Ty Leap said.

Thought leaders, influencers and the professional cadres were largely eliminated during the KR period, true. But a complete dismantling of the Khmer social infrastructure is reinforced by this large-scale avoidance of the topic. It is a rift, chasm, disconnect that winds and rends through the entire fabric of Khmer society.

For thousands of years Buddhism has been the pillar of social cohesion– a vanguard of Khmer culture and moral authority in matters of social and even political affairs. But the abbots’ and monks’ relevance has deteriorated, largely from decimation of the top ranks of the Buddhist order. This left a fragmented social system and a void, at a time it is most needed.

We’re witnessing the extinction of many art forms, from music to fine arts, with little local advocacy. Such cultural expressions usually boom after conflict periods; it is part of a society’s healing process to document memories. But the arts are unsupported, even from the royal family, many of whom including the King are gifted artists. This point is very telling by itself. The royal family does not reside in-country, and the King is (was?) a dance professor in France who spends little of his life here. What better way to convey the message to your people that Khmer culture is sub-par than to abandon the very channels for social expression.

My colleague’s father was a renowned painter prior to the Khmer Rouge period, and his works hang in the National Museum in Phnom Penh. Thoroughly impressed, K requested an interview. Her response? His art is so old, why would he be interested in it when she can introduce him to more exciting contemporary artists instead. She was sure to add that good artists have had training in the West or from Westerners– her father “only” knew Angkorian style.

These are just a few instances of the absence of pride among Khmer for anything Cambodian.

The generations after the KR only ever knew to aspire to the whims of endless armies of westerners bringing our ideas to them, experimenting on a societal scale at will and for the most part unchecked. Khmers are conditioned to worship the power of the dollar. They’re exposed to and want the excesses they see on the pirated Hollywood blockbusters: fast cars, fast money, throwaway relationships, soundbyte politics and a consumption lifestyle– all a complete flip of the essence of Cambodian philosophy towards life. China, India, Thailand, etc, have all chosen to embrace modernity. But their quest for progress is continuously negotiated against the substance of their cultural identity. Khmers seem not to have this.

Instead of coming from within, foreigners (for lack of elder Khmer mentors) are showing the youth what’s cool about their own Khmer culture. Through the filters of foreign taste, Khmer are learning to appreciate the finer elements of their own traditions. The context is displaced, disconnected, inorganic.

For me, growing up in the US, I was taught the essence of my Filipino heritage in the home, and learned my new country’s cultural nuances through social situations. Most of us have the luxury of this foundation from which to forge our identity, whichever direction that may go. I reject some Filipino and American traditions on the basis that I had grasp of the context. Cambodian kids are given little context from which to move forward.

So what’s in store for Cambodian culture?

Mentors from within the country are still few relative to the boomer population post-KR, but this cadre is steadily growing, (thankfully) embracing their Khmer identity and taking the lead to advocate for it. Ever so slowly, foreigner guidance will give way to this new generation of elders. But it’ll take entire lifetimes. In the meantime, a cultural schizophrenia guides the direction of progress in Cambodia…

A few people have asked for some news feeds of the proceedings, now that the Khmer Rouge tribunal has finally begun. Here are some blogs, news coverage and expert commentaries on the Extraordinary Chamber in the Courts of Cambodia (ECCC):

Cambodia Tribunal Monitor, with webcasts of the proceedings and video commentaries, by Western legal and academic experts on the Khmer Rouge or Genocide.

Ka-set is the Khmer-ization of the French word for newsmagazine. This news website aims to promote quality journalism, and is a project started by four journalists (Cambodian, French and Belgian), affiliated with Cambodge Soir (French-language newspaper in Phnom Penh), in 2007.

Documentation Center of Cambodia is a rights group advocating for greater access to information.

From the Phnom Penh Post (the English language newspaper of Phnom Penh) is the Khmer Tribunal Report, a blog on progress at the ECCC.

This is the official site of the Extraordinary Chamber of the Courts in Cambodia (ECCC), in English, Khmer and French. Unfortunately it is down quite often (but that may just be for connections in Cambodia).

And here is the controversial website of Ieng Sary’s defense. It fuels debate about confidentiality in the UN-backed court. Ieng Sary was the former Khmer Rouge’s Foreign Minister.
.

Mental health trauma after years of war is naturally extensively studied in public health. But even living in Cambodia for many months now hasn’t dawned understanding on me of the ravages of the Khmer Rouge period until I took meditation courses with some Khmers.

The most popular meditation techniques, usually associated with spiritual activity, are of Eastern origin ie. martial arts and yoga. The premise of meditation is to gain insight or focus, by relaxing the body and calming and focusing the mind. It’s a skill that allows positive energy to be summoned at will.

And one of the methods used for clearing the mind is to recall a feeling of peace. I can easily recall such moments: standing on top of a mountain and looking out over the hills… standing on a beach with the waves crashing on the sand… blue skies… I take this for granted. But to the others in the class, this “peace” was not a familiar emotion. They couldn’t grasp the concept. How can you explain peace to someone who’s only known fear…?