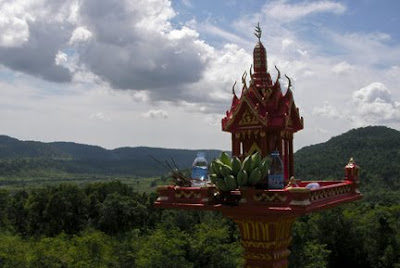 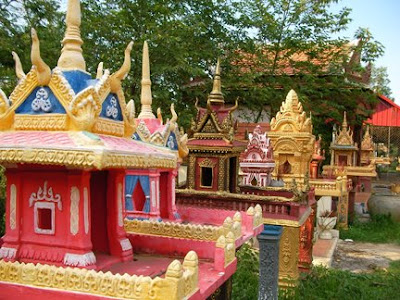 Spirits– can’t live with them, can’t live without appeasing them. In Asia, nature or ‘supernatural’ forces are very much a part of one’s being and not disconnected as it is in the modern west.

When people move into a new home they create a disturbance in the natural world. In a gesture of deference and to re-balance the natural surroundings, it is tradition to appease the displaced spirits. Bribes of various sorts ranging from incense, fruits, vegetables, water and rice etc are regularly placed in these houses, sort of like an eviction compensation. It isn’t that the spirits will actually eat them, and in fact some of these houses can be left in such a state as to seem that the spirits are expected to clean their little abodes. They will not. These are symbolic acts of respect towards the earth and to divine beings who live alongside us.

See the bananas and bottles of water in the first photo? On the road down to Koh Kong there are a few spirit houses placed along the sides of the road. Sometimes people will stop, leave a lagniappe and ask the spirits in that area to look over them in their travels and keep mischief and danger away. If many accidents have occurred on a specific road a spirit house will be placed there, to allow travelers to pacify the tormented spirits.

It’s interesting to note that I have never seen birds nesting in these houses, nor eating the plentiful fruits left at them. I hadn’t had a drop of clue or curiosity yet to ask my Khmer colleagues and friends why this is so. I guess it satisfies my sensibilities that it really does have to do with an otherwordly presence.
.

The blistery summer sun finally yawned and shifted attention elsewhere, allowing a lively tropical storm to play in the Cardamom Mountains. Screeching winds and driving torrents of rain obliged the topographical audience of trees and flora to bend and sway in spirited waves. Onstage in the heavens thunder raged while spectacular light shows illuminated our path. Range Rover engineers were done proud on those unpaved jungle passes. Such backdrop commands resonance with the soul, a harmony of earth and spirit, a communion of–

As we awaited transport to cross the river, a curious contraption, defying the tedium of logic, bobbed into view. It asked to be stared at rudely. The apparatus comprised planks of wood wrongly secured atop three rowboats tied together, and was propelled by a small outboard motor looking for all the world embarrassed at such indignity. Fierce currents crashed around rocky protrusions in the water as our vehicle boarded the raft. Sigh. This is for the brave of heart, and I can only doggie paddle. My useless colleagues are unperturbed.

I used to wonder at some of the stories from the field. But they were written in the stars and I am now convinced. At the next channel crossing, at a restaurant stop, my autopilot checklist overlooked a key variable. [Minimal animals, check. Refuse control, sigh, check. No (uh, cross out)– Minimal (mmh, not quite)– PASSABLE! odor, check. Staff lacking symptomatic lesions, scratches, welts, redness in the eyes, swellings, festering wounds, other evidence of disagreeable heaven-forbid-transmissible condition, welllllllllll–squirm–sigh–oh alright, check. All systems go.] Nature called– texted, actually (calls are expensive in these parts). This way, pointed the cook cheerily, and the corners of my relaxed disposition soon dropped. A stilted outhouse stood over the water three meters into the river, the toilet a hole cut out of the wooden floor. Like Koi in a pond trained by daily feedings that an approaching human meant chow, finned creatures and what appeared to be a pig (who knew pigs swim) gathered enthusiastically beneath the outhouse at my approach. As I prematurely thanked lucky stars that I did not have fish or pork, the iced coffee I’d just consumed snickered at departing wits: the icehouse was next door downriver. [Sigh Of Relief exit stage right. Gag Reflex enter stage left.]

Nestled with its back to the jungle, embracing the Gulf of Thailand, lacking paved roads and bridges, far, far from Apple Pie and Elvis Impersonators and the newly snuck-in UN Ambassador and Gray Bureaucrats sealing the fate of the virgin oil field just discovered off its coasts, the poor island city of Koh Kong bears all the charm of an isolated seaside town, where the pace sips a coconut-papaya shake beneath a swaying waterside palm. Its proximity to Thailand allows it to siphon electricity and cable channels from its neighbor. But the conduits are shut down during heavy rains, pitching Magnavoxes and Pioneers and the karaoke on all three city streets into silence. Despite the severe poverty, its people are a positive lot with a ready smile, and they know that better days are coming.

Besides the offshore drilling that will replace the venturesome capitalist’s ten-cent-coconut-papaya shake (or was it a mango-coconut-papaya shake?) with a martini-shaken-not-stirred-charge-it, there is the planned highway linking Koh Kong with Phnom Penh. The ink had not dried on the approved construction project when land prices soared to US levels and hands shook on business deals. The initial phase bulldozed the road in front of our survey site, and access to the health center was via large mounds of dirt and a displaced canal, so off went the shoes and hitch went the britches. But it is rainy season and, really, water buffalo dung is just mashed vegetation.

How can you build Character when it keeps trying to escape?

That’s when the banana dropped. A little Khmer girl was scampering about in the dilapidated clinic, daughter of one of our interviewers. In her small hand was a small banana, peeled, the sweet kind, the kind you can pop whole into your mouth it is that small. Banana scrawled itself onto my mental shopping list while the banana in the little girl’s grip fell to the ground in a careless instant. Unfazed, she picked it up, took a bite, and looked about. I sought cover. But little girls with dirty little bananas in their dirty little fists are quick and the banana was soon being offered to me with the sweetest smile. Kick her, dirty banana will go away, Evil Nat rasped. Angel Nat on the other shoulder —it’s got wings— said kindly, Take the banana.

All eyes turned towards this unfolding drama. Kick her— The little girl looked at me. Take the banana— My team looked at me. Kick her— I looked at the banana. Take the banana— The banana looked at me. [Overhead two pressure systems collided. Tears from timid clouds rained down.] Everyone on my teams are Khmer, hired and paid by NCHADS, —It’s dirty!!— the STI surveillance unit of the Cambodian Ministry of Health, —That isn’t the point!— in turn receiving funds from the US-based ngo FHI, —Kick her!— which in turn works with monies disbursed by the big kahuna in the alphabet soup of development, USAID. [The cauldron of the heavens bubbled and boiled over as oxygen molecules fleed the scene.] As the only foreigner I’m the manifestation of privilege, –Take the banana!– dollar behind the paycheck, a face to link to the billions in foreign aid each year. Each move however insignificant, —Kick her!— in judging eyes directly victimized by our policies, is America incarnate. [Electrons hissed and prepared for landing. The very air cackled and spit!!] Take the banana!! What are you gonna do, the silent universe vortexed ominously. Kick her!! What are you gonna do, the wealth of nations sneered. Take it already!! Kick her!! Take thE BANANA!! KICK H– WHAT ARE YOU GONNA DO, you arrogant, bomb-happy, neo-colonialist hypocrite preaching at masses too starved to care– KICK HER!!! TAKE THE BANANA!!! –trawling the world looking for more–more!!–like you don’t have enough and wheRE ARE YOU GONNA GET IT YOU’RE AT THE ENDS OF THE EARTH HERE!!! [Roar of thunder!!!] WHATAREYOUGONNADO?!?!?!

I took the banana. And crossed bananas off the shopping list.