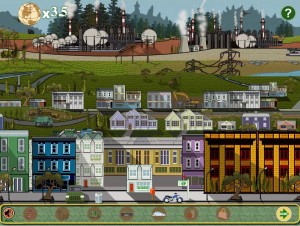 The Earth coudn’t support its 6.6 billion residents if everyone lived like a typical American. Consumer consequences will tell you how many planets it would take to support your lifestyle on a planetary scale and share some ideas for making your “footprint” a little smaller.

This formula has been making the rounds of the blogosphere, news and ads. The game walks you through some lifestyle questions such as the energy usage, transportation, food and shopping, and results show how many “Earths” worth of natural resources it would take to sustain all 6.6 billion humans if we all lived just like you. In my case, we’d need 3.5 planet Earths :-(

Cambodia is a tad far from the hubs of Zen interest, but its philosophy is apt because we are not without the onslaught of rabid change in Phnom Penh, given vast sums of development aid and foreign investment. It’s interesting to see a newly minted middle class so taken with modernisation and the rush of consumerist culture. Well, interesting but sad at the same time, because embrace of materialistic entertainment culture–or rather, lust for it– comes at the expense of so many beautiful elements Khmer and Angkorian, that is steadily lost to antiquity.

An interesting development to highlight this was during the Chinese New Year celebrations this year (Chinese and Khmer traditions are embraced in Cambodia). Tradition has it that various gods ascend to the heavens to pay respects and report on human affairs to the Jade Emperor, the Supreme Taoist deity. People burn ritualistic paper money to assist with the gods’ travel. This year, paper Lexus, cell phones, TVs and other upmarket goods were added to the paper money that the custom was traditionally limited to… Khmers are also increasingly placing value on goods owned rather than the person, and treating each other accordingly to displayed wealth. I suppose there are parallels to other societies that similarly experienced sudden affluence… It is just rather discomfiting to see it in fast-forward in a third-world country…

Zen is about waking up to the present moment, perceiving a reality that is exactly as it is, rather than via a biased wall of emotions, opinions, judgments. It is a discipline of simplicity, in all manner of action, thought, being. Popular culture attributes it to Japanese development, but it is believed to have evolved from the Chinese interpretation of the Buddhist concept of enlightenment, and then from the stories of Buddha in India. (I’m not an expert in Eastern philosophies, so please correct as necessary!)

It’s a fitting philosophy for aid and development workers who work abroad and see these fast-paced changes. What with incongruous goals for “harmonisation” among partners, contradictory practices to policies, conflicting commitments and underlying motives for “aid” from every actor, it’s a quagmire difficult to navigate.

To bring it down to a bite-sized personal lifestyle application to start, there is an upshot to moving every few years –being forced to simplify regularly! It’s beyond practical to discard junk; minimalism contributes to mental well-being and productivity, especially in places far removed from the physical order and organisation of back home and cycling through processes with a fair share of destructive side effects.

So for the expatriate life, a Zen start to the working and living space: there’s a lot of junk out there to process– Ditch the clutter, physically and mentally!