Since D was here, we thought we’d take that trip to the border temple that Keith and I have wanted to see. Thailand tends to have dispute with UNESCO over the World Heritage status of the temple and award of the grounds to Cambodia (it’s a disputed land area on the border) whenever they are having domestic political turmoil. It is pre-Angkorian, so it predates Angkor Wat. Because it’s a conflict area restoration has been on hold and there are very few foreigners who come to this mountaintop ruin. You essentially put yourself between the Cambodian troops and the Thais when you visit this place. 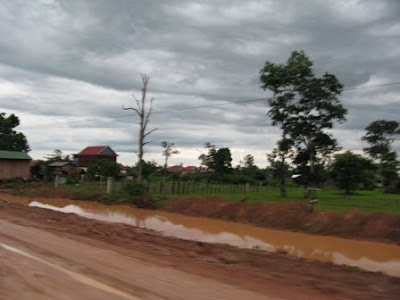 Preah Vihear is 4hrs from Siem Reap (Angkor Wat), which is 5hrs from Phnom Penh. About an hour out of Siem Reap the paved road ends. If it’s raining, your driver better be damn good! Even SUVs are useless when you can’t maneuver the car. It is almost like driving in deep snow. 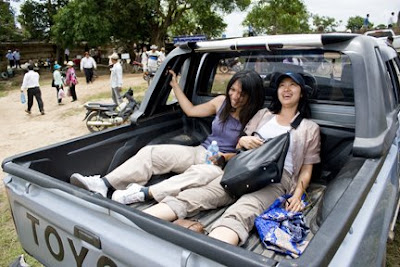 Thankfully there wasn’t any rain when we arrived at Preah Vihear. It’s a steep climb up a now-paved road on this mountain, so you need a four-wheel drive. Needless to say, it isn’t smooth. I still have some bruises. At one point there were about nine of us crammed into the bed of the pickup truck. D and I held on for dear life smack in the middle of the bed while seasoned soldiers sat on the edge casually hanging on, laughing at us.
At the top, you’re hard-pressed to find signs of conflict. The ruins are overrun by soldiers- surreal. There are Khmer tourists wandering about like the place hadn’t been pelted with shells only recently. No foreigners (namely, no busloads of package tourists from Japan, Korea, China, and Europe), so that was VERY nice! 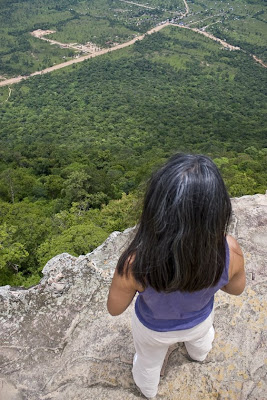 Hmm.. Look at that concentrated gray coming out of the side of my head over the parietal lobe. Maybe I did too much math in grad school [scratches head].
That is Preah Vihear town below. Follow that road right (southeast?) and it leads to Ang Long Veng, a very historic city where Pol Pot also is buried. There’s nothing out in these parts, so accommodations are slim and very bare / basic. 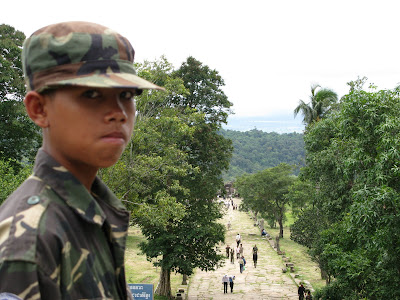 Some of the soldiers look like little kids. They aren’t allowed off the mountain. When we came back down they searched our vehicle for stowaways. 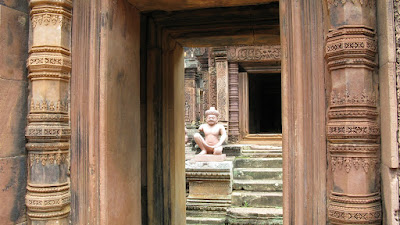 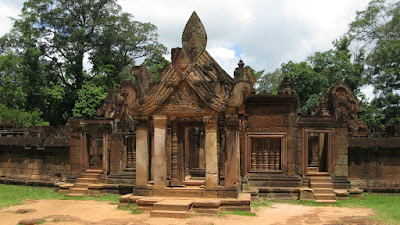 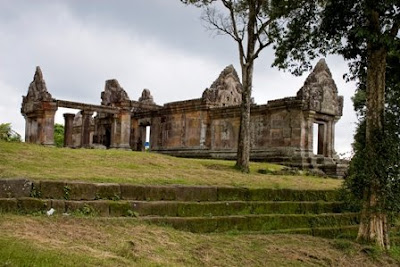 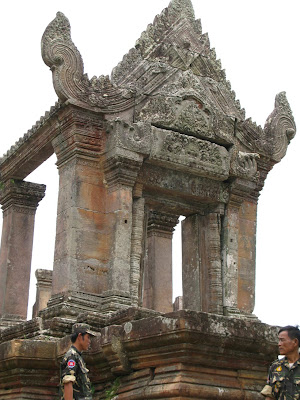 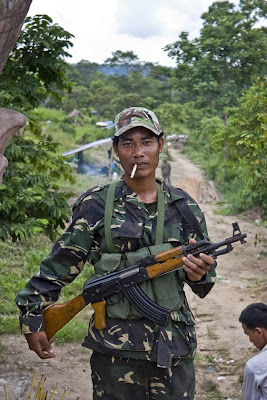 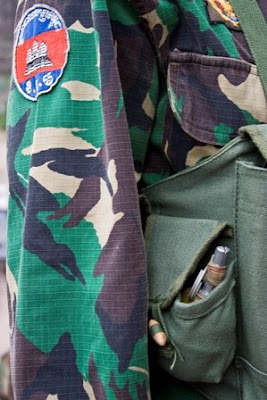 See this guy’s grenade? I pointed at it, was thinking that pin looks could get popped easily off. But it is ok, I was told it is secure. There is a rubber band holding it in, and he handed it to me. Heavy. The rubber band? You know when those things get old and start to dry up brittle? I thought we’d best leave soon.. 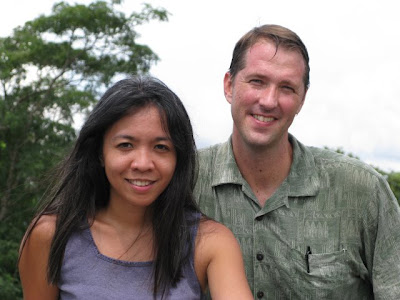 Long day, but a great time. :-) If you can make it out here while the troops are still around it’s a great time. They’re awesome hosts. They even let you hold their weapons. Strange to be handling these loaded guns, rockets, grenades etc. At the end you give the soldiers some small cash so they can buy cigarettes.