There’s no shortage of polls that demonstrate just how uninformed people are on a range of everyday topics. I certainly might bump the stats against Americans myself if interviewed. But a curious myth that just won’t die is how much of the budget Americans think goes to foreign aid. With so many clarifications across news and edutainment sources, why do people hold on to the belief that foreign aid is bankrupting the country??

No, foreign aid is not all about altruism.

There must be hundreds of (google-able) essays on the objectives of foreign aid, and it isn’t about helping the poor. Perhaps people on the ground, like me for instance, are on this career track because we truly wish to make a difference. But the poverty industry wasn’t conceived nor even pretends to be anything less than a political tool and economic stimulus for the donor country.

I have to repost Dan Holliday’s response on Quora, to the question “What is the purpose of US foreign aid contributions?”

US foreign aid does a number of extraordinarily important things to a number of nations who are critical to the USA.  Total US Government provided foreign aid (Military, Domestic, Economic, Etc) was about $53 billion in 2011.  The payback of that aid is often times greater than the gift and even when not, the secondary and tertiary benefits are often times priceless:

This all sound very Realpolitik, and it is.  Don´t lie to yourself, if you’re from Europe or China or Japan, your nation does this.  It’s in your nations interest to buy access and benefits for your citizens and corporations.  Few nations do this to the equal of the USA (China, Russia, the UK and France probably do it as well as the US, though), but remember two things (a) it’s not a zero-sum game.  What benefits the west in the case of Africa is helping pull a lot of people out of poverty and (b) even when it doesn’t, you only have the convenience of being pissy about the Machiavellian nature of foreign aid because that aid is contributing to the food on your table.

Now, don’t take my tone as advocacy for this.  I’m a secular, atheist, humanist. I hated the Bush era policy of restricting away from abortions in the 2000’s and the Clinton & Bush era policies of defending American missionary services (which has seen wonderful results in Uganda).  But, I’m also not so foolish as to deny their necessity and benefits in many cases.

A useful article on the differences between the platforms on US foreign aid. Especially interesting for my field is the debate on where to park Obama’s signature Global Health Initiative. This year a decision was made to maintain its diplomacy focus by parking it in the State Department (versus transferring it to USAID, the USG’s development agency). The discussion is an interesting one because it explores the nature of US foreign aid, which is managed by multiple USG agencies. 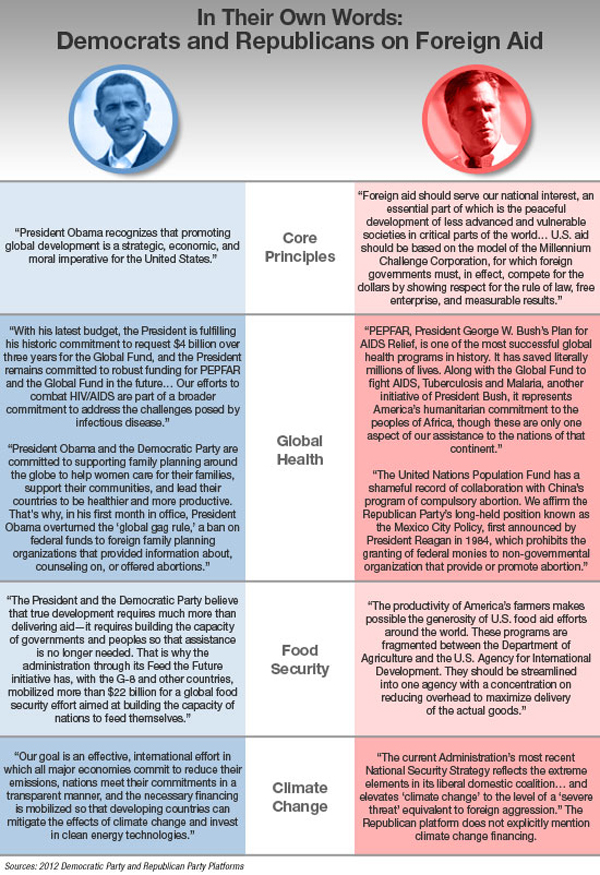 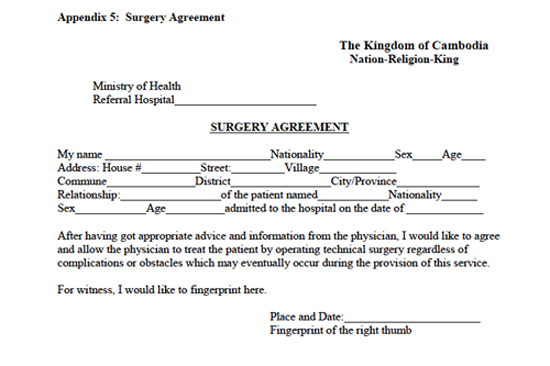 This is the English translation of a surgery consent form included in the hospital guidelines. It has the gist, but perhaps it isn’t quite what the writer meant..?

As a mom, it tears at my heart. It was shocking at the same time that I know it meant a better life for the baby.

It’s commonplace, but I don’t often personally see or hear of it. A woman gave birth to a healthy baby girl around 7am, at a health center where we were field-testing some questionnaires. Usually anyone admitted to a facility is accompanied by throngs of family members, who provide the care to the patient that back home would be done by health staff (eg providing meals, making sure medicines are taken, changing the dressings etc). But there was no one with this very young mother. She was thin, ragged, and very weak. She breastfed the baby a bit, on prompting by the staff, but by evening someone noticed that she hadn’t eaten all day. She couldn’t afford it – not even a bowl of porridge (around 2000 Riel or US$0.50) from the lady carrying pots and bowls in baskets balanced on a bamboo pole.

The new mother asked the staff to look for someone to take the baby because she couldn’t afford to feed her. As it turns out, my colleague has an older sister who is unable to bear children, so she agreed to take the baby for her sister. She offered some money to the staff and the staff gave a portion of it to the mother.

My colleague’s sister has had the baby now for a week. She loves the baby like her own, and she registered the birth so according to official records she is the biological mother. I wondered about the poor woman, but my colleague has no plans to find her or keep in touch. I suppose that’s only natural.

As a side note, civil registration was introduced in Cambodia only as recently as 2002, and by 2005 only 5% of the population was registered. There’s no requirement on health facilities to do more than report the number of births (to the Ministry of Health). The family takes responsibility for registering the birth (to the Sangkat or Commune, who facilitates the registration with the Ministry of Interior and birth certificate to the baby). This proof of existence is a person’s ticket to citizenship and provides the evidence needed for claims to social services and benefits. A country’s database of vital events like births, deaths, marriages helps the government determine the best use of resources eg public health programming.


A woman died today after giving birth to a healthy baby boy. We came to the health facility and saw her just in time to see the life fade from her eyes after hemorrhaging in the ward where there were four midwives and an obstetrician on duty. Only one staff was attending to the patient at the time of death – a student midwife. The student claimed she told the staff, but they were busy with other patients. The staff corroborated this. The fact that there was no prioritization for the emergency case is testament to how dysfunctional the health sector still is, and how poor the capacity of health staff are that this is allowed to happen. There won’t be a maternal audit, or changes to standard operating procedures, because this facility is not directly supported by a donor and the Ministry of Health is too poorly resourced and managed to do anything about just one case.

The term for childbirth in Khmer is chlong tonle, which literally means “crossing the river”; it’s dangerous and you don’t know if you’ll make it across. Death always leaves you stunned. It’s staggering when you see a case that was entirely preventable.

Here’s an interactive update on ODAs from the OECD. It’s a simple, straightforward series, worth clicking through if you like seeing the big picture. The most relevant is that the US still remains the top donor in absolute terms (followed by Germany, the United Kingdom, France, and Japan – all present in Cambodia except DfID who exited in 2011). This is despite a real drop of 0.9% from 2010.

Thankfully there’s a consensus among policymakers that foreign assistance is a critical component of foreign policy, even in the midst of calls for massive cuts during this election year. Seriously, US political “debates” are like tragicomedies except it makes your head hurt because you’re aware it isn’t entertainment. But I digress.

Updating trends so that outdated cold/war priorities aren’t perpetuated, and harnessing the US’ strength in innovation, technology and product development to develop public-private partnerships are already being programmed in.

Cambodia could use a bit of these changes. I can’t see USAID funds drying up in Cambodia given the history of the two countries, plus its relative geopolitical importance in this region (ironic isn’t it). But we’ll see a lot of waste because of the China set.