Battambang is a culinary destination. There are varieties of fruits and vegetables native to this region that don’t grow as well anywhere else. And the local preparation of many condiments and foods have a distinct character to them.

Every night on the riverside, food vendors set up shop. On the far end of (further from the market than the tokalok, or fruit shake, stalls) is a routine stop whenever my colleagues and I are in town. I think two or three vendors cook the same thing but my colleagues prefer the family at the end; the woman in the picture below is the main cook and everyone else helps with other parts of the operation.  Grilled in banana leaves and eaten with rice, sangvaec* is a processed fish product made over the course of several days. It’s similar to nhem (2nd picture below), except it’s grilled so it has a smokiness to it. It’s served with nom ban chok (white noodles), a tray of vegetables (eg slices of cucumber, green tomatoes) and all sorts of tasty green leaves (including lettuce leaves). A combination of all of these – sang vaec, noodle, cucumber, different leaves) are wrapped in a green leaf and dipped into a sweet-spicy sauce. It’s similar to the way people eat ban xiao, or what’s commonly known as Vietnamese pancake (just keep in mind the Khmer don’t call it “Vietnamese” pancake).

*As with any language that use a different (non-Roman) alphabet, transliterating to English is a bit difficult. There’s no or poor equivalent in English for many Khmer characters. 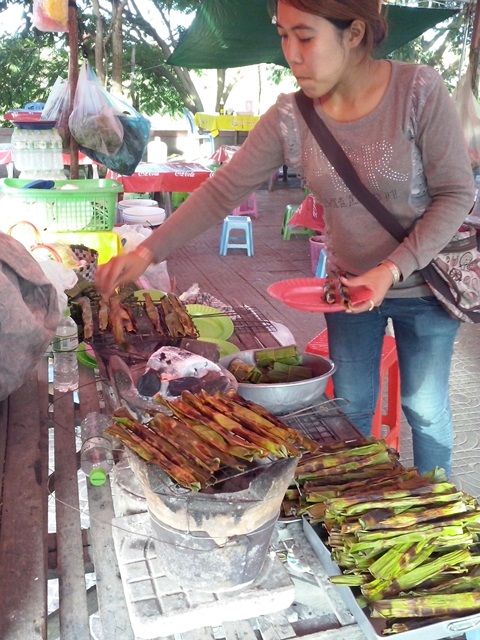 Nhem (nem?) – also a local delicacy – are similar to sangvaec, but these fish rolls are wrapped in a small leaf with a slice of chili. They’re sold in the markets and street stalls. River fish is pounded with spices, then fermented a few days to get that hint of sourness. It would be considered rude if we came back to Phnom Penh without several bunches of these to hand out to everyone. A “bunch” is a cluster of about 7-10 balls, and costs 1000riel (US$0.25) or more. They also have that fermented taste (without sangvaec’s smoked/grilled flavoring). It’s a pretty tasty snack, but just with prahok and durian, definitely an acquired taste for Western palates. 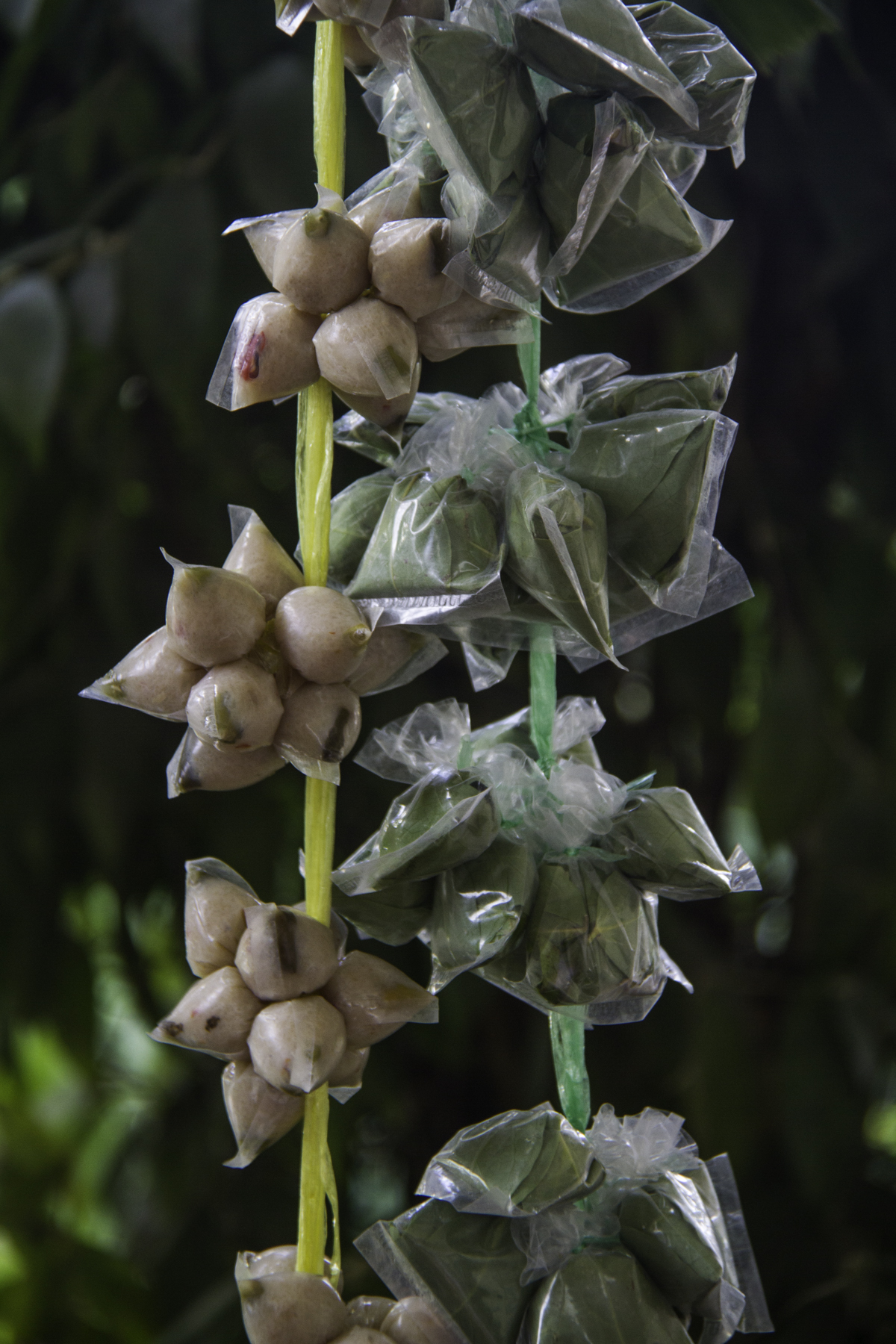 Nhem also come in bigger sizes. In the picture below you can see the bunches hanging on strings towards the back. To the front of the photo are those coconut (Dong Ktii) which are native and specific to Battambang. Where regular coconuts are just 200riel, these are very rare and cost 32,000riel (US$8.00). I’m still seeking a coconut expert to tell me more about this specific variety. They seem similar to the macapuno variety in the Philippines, which is a mutant strain that doesn’t propagate. The interior is filled with soft sweet jelly-like meat, with very little juice. 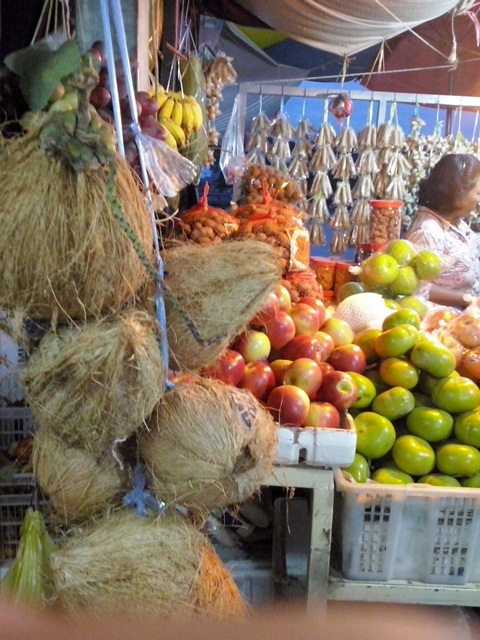 The following aren’t native to Battambang but they’re found on the bustling market or riverside stalls at dinnertime (which is anywhere between 4pm to an hour after sundown here). One very popular street food is this skewer of chicken eggs. The eggs were drained, spiced, then put back into the shells. They’re then grilled and served hot. 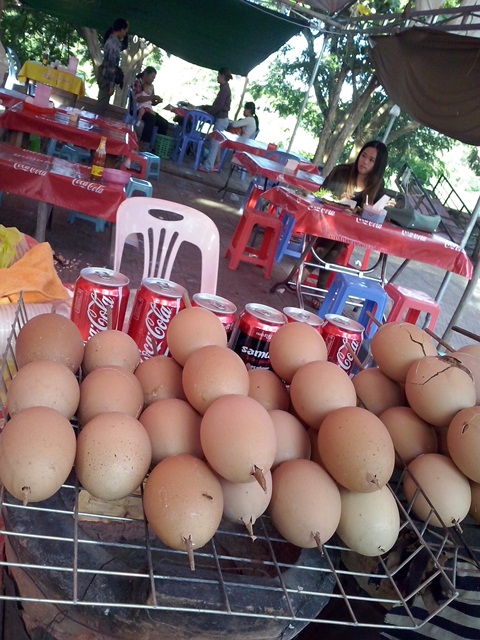 And of course, the perennial favorite of street food in Asia, fertilized duck egg, is always on offer wherever you go. 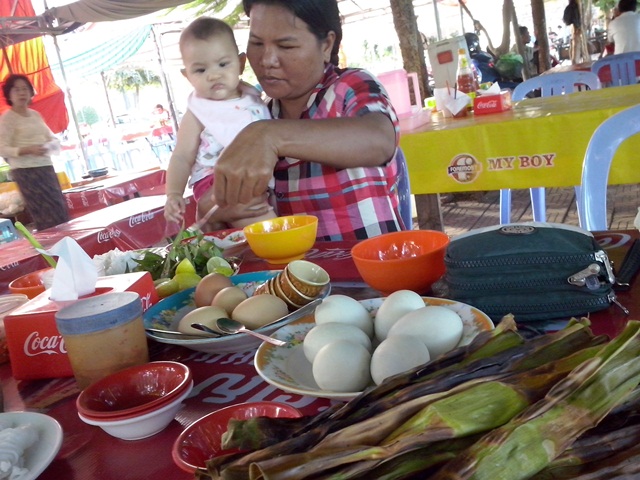 The nightly food market is a busy event. About 30 vendors set up their barbecue stations, tables of foods – trays of prahok, vats of rice or soup, bowls of sweets and desserts – and sell them all for take-away. They’re placed into plastic bags. Yes, even soups go into plastic bags and somewhat sealed by tying it off with a rubber band. 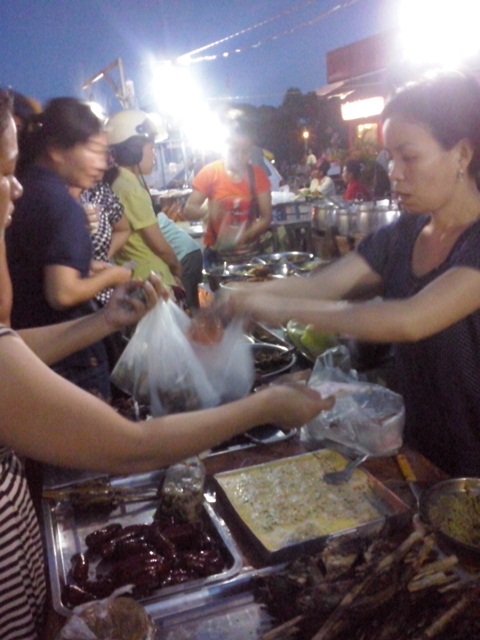 All manner of grilled river fish and meats can be found here. An entire grilled chicken can set you back around 20,000riel (US$5). One of the tastier fish is tilapia prepared by covering it in sea salt and a mix of spices, wrapping it in foil, and grilling it. The meat is very tender and tasty. 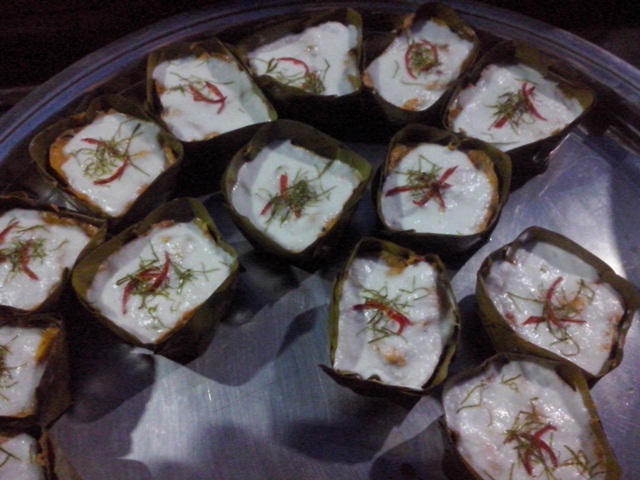 Prahok-type preparations are grilled in banana leaves and sold hot. This king of condiments is a mashed, salted and fermented fish paste that goes into many dishes. There is no way to avoid this piquant delicacy! 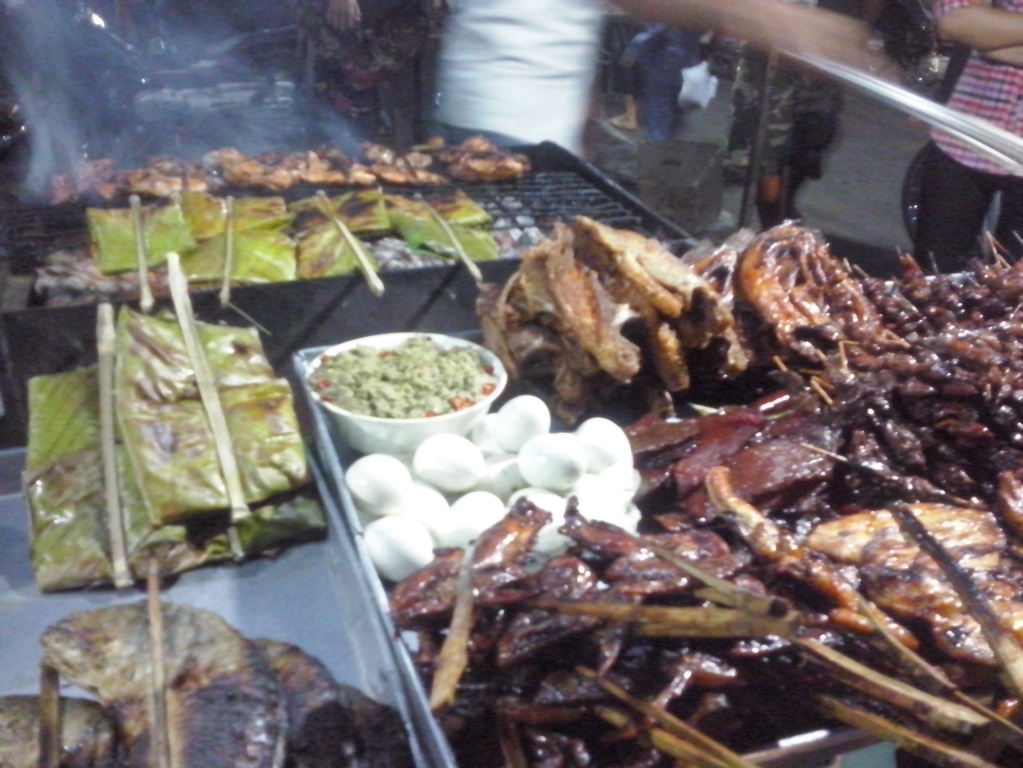 I love ice cream. One of the things I was looking forward to most when I went back to Manila after being away for over 20 years is  the ice cream. Mango, ube (purple yam), macapuno (a type of mutant coconut with soft meat inside instead of water), atis (sugar apple), nanca (jackfruit), pinipig (pounded glutinous rice) – just to name a few of the more interesting tropical flavors. Back when I was a kid there the brand to get was Magnolia, but the line seems to have faded a bit. Towards the end of our stay in Manila I had to binge on this one premium brand, Arce Dairy. It’s less sweet but packs a denser taste than other brands cuz (or so I’m told) it’s made with carabao milk and more natural ingredients.