I love these popsicles once in a while. They’re one of the few interesting ice cream brands I’ve seen in Cambodia. By interesting I mean the flavors are local, not the typical imported vanilla chocolate strawberry. They carry red bean, sweet yellow corn, durian, taro (this is the least tasty flavor unfortunately), and black glutinous rice. I’ve only ever seen them in the bigger TELA gas station mini-marts or at the Paragon grocery store (behind the Royal Palace in Phnom Penh). 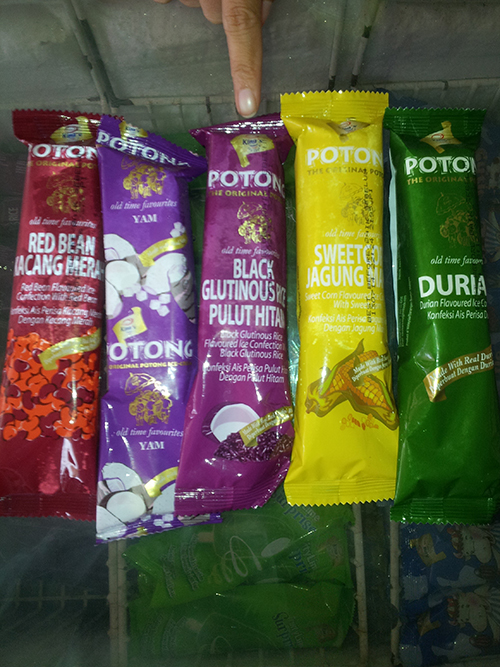 …speaking of pungent fruits.. It isn’t durian season, but Thai varieties are available all year so we can get them here. I had a craving for it a few weeks ago and the little boy got in on the fun. Yep, he’s had a taste and seems to like it. 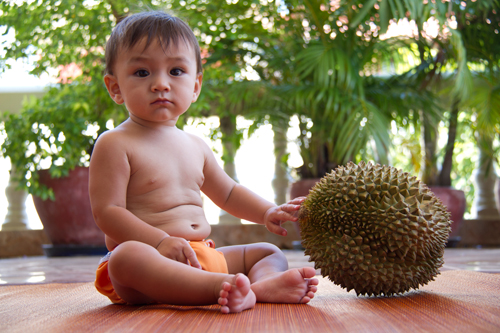 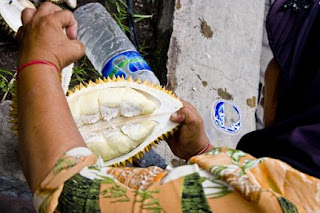 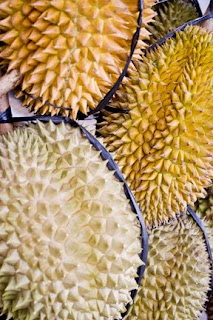 The hot and sticky summers in April, May and June bring the season of the best fruits of the tropics. This naturally includes durian, which of course you must eat with mangosteens (arguably one of the better things about Asia) or else your body temperature rises too much. But then again, this is when mangoes are falling off the trees on the roads and there’s just too much for consumption including exports. So I guess I can handle that waft of durian odor once in a while….

A royal decree was issued in the night. Everyone in Cambodia who has shoes is to take them off, and they are to do it inside my room. Groan. Below my hotel window (wide open cuz the one AC unit in the entire town was not allocated to this hut) is a fruit stall enterprise specializing in durian, a treat to wake up to at 6am. It is that time of year when foreigners are subjected to Fear Factor challenges involving this foul mishap of creation. It is the season, they are everywhere, and the Khmers must share. There is particular affinity for this fruit, drawing national pride, cherished reverently, like there is a little god inside the paranormal-looking blob. When foreigners are offered a piece of it Khmer radars within a mile radius zero in and they all whip around to see what you will do. You ought not refuse– their expressions are benign enough, friendly in fact, but it gives eerie pause. If this were a scene in a horror flick or nightmare the wrong response will exact gruesome vengeance straight from the bowels of hell. Think twice, foreigner. Trips to market are now unhappy excursions. Since I have the big SUV my driver is put upon to haul the putrid cargo about, and of course the stench lingers. Usually I stay a few paces behind my translator at the market, who refuses to be seen with me because sellers tack on a “foreigner tax”. But when haggling for durian I don’t mind at all looking conspicuously foreign to jack up the price. Purchases came to a short-lived halt until she caught on.

Gastronomical conquests become a newcomer’s specialty. One of the more infamous aphrodisiacs hereabouts Asia is called balut in Tagalog. It is a fertilized duck egg, harvested just days before hatch date and boiled so that the fetus is fully formed and decadently crunchy. Bugs are also much prized fast food items– spiders, ants, crickets, really anything that moves, the more legs the better. To be fair, the cockroach that went into the fryer in Poipet was not the same creature spawned of urban squalor– they insist it’s a beetle, bred for its crispy, nutty texture, though that is hardly encouragement enough to pop one in my mouth. Everything gets fried, dyed, dried. Colors I normally associate with radioactive elements and glow-in-the-dark objects are particularly popular additives to milks, juices, and sweets. Meat jerkies are common too, and my neighbors occasionally lay things out to dessicate. The ones resembling small rodents sporting extra legs always throw me for a loop, but my inquiring mind is mum, quite content to leave ignorance intact. Flee! Flee!

These lead to sporadic obsessions I can’t shake– pasta, peanut butter, chocolate– {{When the dog bites When the bee stings When I’m feeeeeling saaaaad . . . }}}. I’m still nursing a chocolate craving that won’t go away, initially sadly coincident with the expat exodus from the Khmer New Year, which took with it all the baking talent of Phnom Penh (the French colonialists failed miserably in dessert indoctrination). That precipitated a baking fixation, a difficult endeavor in a country where appliances that generate additional heat are not popular, so you are put upon to make your own oven. Luckily my pal RS was not only able to prevent the forthcoming inferno– he offered use of his oven– his baking skills also far exceeds mine (not a stellar achievement, but desperate circumstances justify disproportionate merit). . . . . mmm, a little piece of heaven can reduce all else to insignificance.

Working off a chocolate binge is a problem. Only tourists wear shorts and/or a tank top in public, branding themselves such by doing so. Best times for activity to avoid that fresh-popped-in-the-oven feeling are either end of the midday heat– around 4am or 11pm. Volleyball courts aren’t optimal, unless diving into pavement is part of your routine. There are two gyms, and two tended tennis courts lacking weeds and cracks to assist the ball out of play. These conditions thwart an already dim resolve to work out. So one weekend I joined the Hash House Harriers, a running club that exists in most cities in response to the expat need for fraternity and drinki– err, recreation. (CW, this group must be in Maputo?). I hadn’t done anything remotely active in many months, but this truth is not impressive so I fibbed about my activity level when they asked what kind of running I do. Bad mistake, my second floor apartment suddenly presented a challenge to twitching legs for a full week.

Work is great. Fieldwork is interesting, especially when theory and practice find detours around each other. And who in public health doesn’t have a story about condom demonstrations. We set up temporary labs in the Provincial AIDS Offices, which conduct condom use programs. A woman came in one day while we were there, complaining of pregnancy. Their wooden penis went missing for a few days, so the peer educators substituted bananas. Apparently the message on where exactly to place the condom went awry, because all bananas in her house now get one. LOL. Not those bananas lady. And have you ever used a translator? I ask a question, it is translated, and immediately translator and subject are engrossed in animated dialogue. Twenty minutes later, pen and notebook in hand expecting some good material, my translator turns to me with: “He said yes.” . . . ?!. . . How long is the Khmer word for ‘yes’??

Being so often on the road reminds me how far off the comfort zone we are. I don’t usually prefer the backseat due to motion sickness, but given that everyone has the right of way here I opt for illness. It seems a widely held belief that increasing velocity will relieve other objects approaching the same intersection of mass, and I find myself in perpetual unease at having to one day demonstrate this theory wrong. There is a prompt– only the Khmers hear these voices– to shove pedal to the metal upon nearing the crossroads. At intersections across the country foreigners riding backseat in all manner of transport can be seen craning our necks in rising panic proportionate to speed, searching for the cause of this lunacy. What’s happening?! Sometimes eyes will meet and befuddlement is mirrored in a split instant– misery appreciates company. Then the imminent peril ends, contact is broken, the junction is past. {{breathe}} I’m alive!!! {{insert maniacal laugh}} Vehicles ought to be equipped with toys and other diversions, soft things preferably, for just such treacherous outings down the street.

Ah the things that guidebooks leave out. Systematic exploration of the emotional topography is Cambodia’s specialty. Theme parks bah!— close encounters with the next life are just a flight away. So come and visit!!! Beyond all this excitement, separation from Keith by the entirety of the planet’s molten magma is quite the trial, especially with the time differential. You veterans, particularly Melanie and Cherry (seems to be a Filipina-Am trend), have an indomitable will and I am inspired. And to fellow colleagues likewise traversing unknown territories by him/herself: the destination is never as exciting is it? Though emails from me are scarce I do read everything in my inbox and print the longer ones for inspiration through bleak spells of no AC, charbroiling temperature, and chocolate deprivation so keep ’em comin’!