As part of many city-wide initiatives meant to encourage preventive behaviors, when the kids got their Covid vaccine they each received a cash incentive. So we started talking about donating part of that money, and Kiva came up as an option for investing for social impact (the ‘investment’ being in social capital, not profit).

There’s been much debate over the years over how impactful investing through Kiva really is. Middleman MFIs (microfinance institutions) who are on the ground provide micro-loans to populations otherwise considered too ‘high risk’ by traditional banking institutions. And Kiva offsets those risks for the MFIs. The pros and cons are discussed at great length on blog posts, business reviews, white papers and in the literature. But all things considered, there’s a case for leveraging models such as Kiva’s and MFIs for empowering people around the world who are unable to access financing tools.

The kids spent some time looking through borrower profiles to learn about the different businesses in various countries. They ended up deciding to support two women with small farms. One is a mother of three in Mali, who will use her loan to purchase seeds and insecticides in order to have a good season. Someday she’s hoping to have a motorized water pump to make production easier. The other, in Ecuador, also has a family, and will use her loan to buy farming supplies and hire workers, to improve her crop of beans.

At this time of the year there’s a 1:1 match for investors, from Kiva’s corporate partners – bonus for stretching the small investments made on the platform.

I’m a big believer in women being the foundation for lifting families and future generations out of poverty, and how important it is to secure their rights, ensure their education, and support their businesses. My Khmer tutor in Phnom Penh helped girls from her village in Kampong Thom by supporting their secondary education and even university for some.

Some of us former students who went back to our home countries helped raise funds for sending the girls to school. Each girl received a package which included tuition fees, a bicycle, clothes, school supplies, and other associated needs. Included in that package is the opportunity costs to her family for losing a set of hands to help earn money.

This effort has its challenges. Sometimes a girl will be forced to leave school because she’s the only one who can care for an elderly or newborn. One of the girls I learned a lot about was married off by her father – as soon as she graduated from university! – to an uneducated man who didn’t want her taking a job, and kept her home to raise kids. I was shocked. What a loss! But I also eventually learned that her kids are growing up to value their education and role in helping the family.

“Proteep” (ប្រទីប) means light. In Cambodia, many girls are denied an education because families are too poor and choose to send their son to school instead. Yet when a girl goes to school, the cycle of poverty can be broken and the benefits can last for generations. As Mme. Soun Neang says, “I see the difference between my own life and my older sister who never went to school.”

Drawing inspiration from her own story, in 2004, Mme. Suon Neang decided she wanted to make a difference and began to provide scholarships to girls from poor families who would not otherwise have gone to school or been able to complete their education. She selected four girls who were good students and had completed third grade. These girls have since completed their university education.

Did you know that performance advice for athletes are mostly based on studies done on young white males, but are generalized to all other populations? How should those of us, from demographics who are not typically studied, approach the mainstream training advice? .

So I’m training for a marathon this year. It’s been a while since I was on a training regimen, and I had coaches back then to push and help me do my best. These days I’m on my own to figure out my workouts, fueling, hydration, etc. There’s a lot of new info!

Below are notes from the various emerging research on gender differences and performance. At the end of this post I reference resource persons and podcasts where I learned these.

Note this is specific to female athletes and how we can leverage the phases of our menstrual cycle to maximize performance potential. There’s also new research for those across the gender spectrum, and other demographics.

This visual below depicts the typical cycle of 28 days (this length varies by individual). Day 1 indicates the first day of bleeding, and this onset occurs due to the drop in oestrogen and progesterone.

In the week before bleeding starts:

During the period (Day 1 of the menstrual cycle is the first day of bleeding):

Around Ovulation the ligaments loosen (part of preparation for possible pregnancy) which brings increased risk for ligament years, like ACL tears.

In the high hormone phase the body can’t access and store carbs as well, so carb intake should increase, e.g., foods that are low on the food chain, like greens.

This strategy is better for lean mass and muscle development than doing strength training 3-4x/wk strength:

These quick summaries are for my personal reference; there is so much to learn. Anyone who has a daughter or who coaches or mentors young girls and women can help them stick to their sports, or optimize their athletic potential(!), by just knowing and working with this menstrual cycle. It’s a game changer that helps girls stay active (rather than letting them quit because of a lack of understanding about all the changes happening at puberty and by cycle). I’m grateful for the scientists who are spearheading research studies around this important topic. Only a few of them are listed below, but I’ll add to it as I learn of them.

Podcasts I found really helpful are below. For some of them, I had to listen a few times! 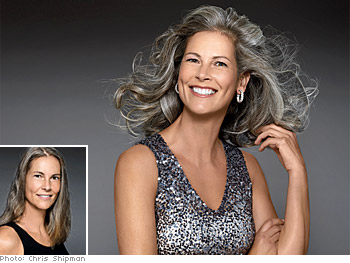 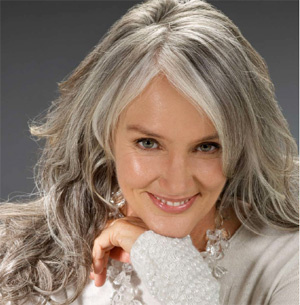 Several women in my family went prematurely gray, and since they were not slaves to the beauty industry I knew from an early age those strands which society hates so much would pop out soon. Sure enough, at the age of 12, they started. Remarks were plenty, but none (that got to my ears) were patronising about my choice to leave it be.

(Frankly, the thought of that carcinogenic sludge on my hair or skin was less the attractive option than staying salt-n-pepper, never mind the time sink of perpetual coloring sessions.)

Here in Southeast Asia, with the role of women as they are (subservient, servile, invisible unless spoken to), the pressure to look good is greater, which explains why the taboo of gray hair is so much worse than it is back home in the US. There’s hardly a salon visit here in which I don’t shock the stylist with my natural grays and scolded that I should color my hair so that I “look good” and make my husband happy.

It’s like the conversations with my male Khmer friends acquaintances: “What do you mean your wife has no interests?” “You don’t know how to cook?”

Needless to say, those stylists got an earful on how this chic-tica views such advice and why they won’t get my business again – but only after the cut and style was finished!

So the times they are a-changin’, and goin’ gray has become the vogue thing in the fashionista world. As uncommon as it is for caucasian women in the spotlight to be comfortable getting photographed with their gray, there are even fewer Asian women mellowing to this route. (Ping me if you see any, I’ll post their photos to replace the ones above, beautiful as they are!)

Photos are from Oprah’s Gray Hair Bible and IndiaInfo’s Gray Hair to Age Backwards?. How is gray hair not seen as sexy and smart? I say flaunt it. Here are my locks: 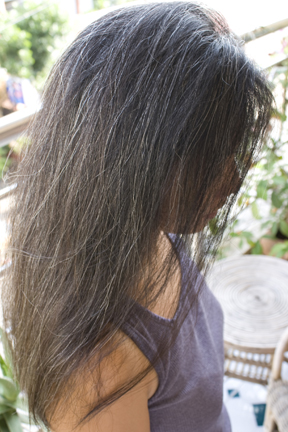 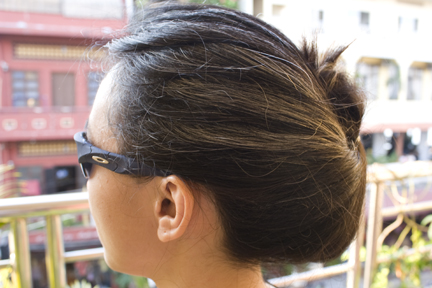